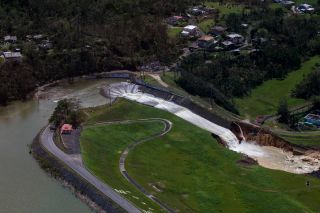 As Puerto Rico struggles to recover from the devastation wrought by Hurricane Maria, a new threat is on the horizon — a storm-cracked dam is in danger of failing, and could flood a river valley inhabited by tens out thousands of people.

Heavy rains and flooding cracked the Guajataca Dam, in northwestern Puerto Rico in the municipality of Quebradillas, about 60 miles (nearly 100 kilometers) to the west of San Juan. Portions of its spillway — drainage channels for surplus water — also collapsed, Miguel Abrams, emergency management director of the city of Quebradillas, told The New York Times.

Evacuation orders for the 70,000 people living in the area were issued on Friday (Sept. 22), and on Saturday (Sept. 23), Puerto Rico Gov. Ricardo Rosselló surveyed the damage, calling the crack "a significant rupture" and telling people to evacuate for their own safety, Reuters reported. And with widespread power failure and loss of cellular communications across the island, authorities went door-to-door to warn residents of the dam's compromised condition, according to CNN. [Hurricane Maria's Aftermath: Photos Reveal Devastation on Caribbean Islands]

The Puerto Rico Electric Power Authority built the Guajataca Dam in 1929 to supply water for drinking and irrigation. It has a water storage capacity of 34,276 acre-feet (42.3 million cubic meters), and provides drinking water for approximately 179,000 people, according to the U.S. Geological Survey.

"Stay away or be swept away," NWS officials warned. "River banks and culverts can become unstable and unsafe. Stay away from evacuated areas until told by emergency officials it is safe to return," they instructed.

Maria, the first Category 4 hurricane to strike Puerto Rico since 1932, tore into the island on Sept. 20, with winds reaching 155 mph (250 km/h). Maria flattened homes and other structures, flooded roads, stripped greenery from trees and left the entire island — home to 3.4 million people — without power. The storm is also responsible for the deaths of 10 people on the island, though that figure is likely to rise, Slate reported.

"This is a game changer," Rosselló told CNN in a television interview earlier today (Sept. 25), describing the staggering extent of the storm's damage. "We need to prevent a humanitarian crisis occurring in America."