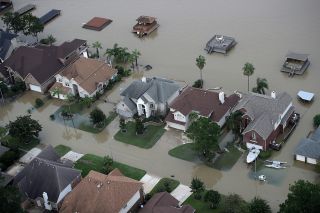 Houston has turned into a giant bathtub after being inundated with relentless rains from Tropical Storm Harvey, which made landfall in Texas as a hurricane but has since been downgraded to a tropical depression.

But while most bathtubs drain quickly (as long as they aren't clogged), it could take days, if not weeks, for the water in Houston to subside, experts told Live Science.

Just like a bathtub, the city is largely covered with impermeable surfaces, such as asphalt and buildings. This means that most of the water can't seep through the ground, but rather has to travel through the area's system of canals and slow-moving bayous, which can become clogged with debris, said Richard Luthy, a professor of civil and environmental engineering at Stanford University. [In Photos: Hurricane Harvey Takes Aim at Texas]

Moreover, the region is mostly flat, meaning the water can't flow that fast, Luthy said. "There is no rapid drainage system," he told Live Science.

Where the water goes

Normally, when Houston has a rainy day, that water drains through a series of canals and bayous, flowing slowly to the Gulf of Mexico through Galveston Bay. "Maybe those systems can handle about 1 foot [0.3 meters] of rain in a day," Luthy said. "But when you get more than that, the water backs up, and the city doesn't have the capacity to hold that water."

Houston does have two reservoirs, named Addicks and Barker, that are designed to hold storm water to prevent the city from flooding, Luthy said. These reservoirs are typically empty, but are now full, and the Army Corps of Engineers is releasing some water so they don't overflow or break. A third reservoir was supposed to be built in the western part of the city, but that area has since been developed, Luthy said.

"The county hasn't left enough space to expand its bayous as the city grew," he said. "Subdivision after subdivision replaced prairie soil that could have soaked up a lot of rain."

In addition, Houston has clay soils that don't easily absorb water, and large amounts of groundwater have been pumped out in the area, causing the land to sink and become more vulnerable to flooding, according to The New York Times.

However, even if Houston did have a better drainage system, Harvey dumped an unprecedented amount of water over the city: From Aug. 24 to Aug. 30, the Cedar Bayou got 51.88 inches (131 centimeters) of rain, according to the National Oceanic and Atmospheric Administration's Weather Prediction Center in College Park, Maryland. This broke the 39-year-old record for contiguous rainfall from a tropical storm or hurricane in the United States, last set in 1978 when Tropical Storm Amelia dropped 48 inches (121 cm) of rain on Medina, Texas, the National Weather Service reported.

As for drainage, it depends on where you are in the region, said Newsha Ajami, a hydrologist and director of Urban Water Policy with Stanford University's Water in the West initiative. If your house is by a bayou or creek, it could sit in water for days, if not weeks. But on the edges of the flood's reach, "those areas are drying up," she said. "I know the rain has already stopped and the sun is shining today." [A History of Destruction: 8 Great Hurricanes]

Planning for the future

Going forward, there are a number of ways for Houston to prevent future catastrophic floods, according to experts.

For instance, the city could build more reservoirs to hold storm water, and it could also expand its network of canals and bayous, Luthy said. Granted, some people might lose their property in the process, but the government could use "right of way" to reclaim those lands to help mitigate flooding, he said.

In addition, the city could pass regulations that ensure developers use pervious surfaces that minimize rainwater runoff whenever a new development is built or an old one is remodeled, Luthy said. Such surfaces could include pervious asphalts and pervious concrete, as well as grassy areas, Ajami said.

"At the end of the day, we have to minimize the impervious areas," Ajami told Live Science. "We have to learn to live with nature."

Sports fields are also pervious, Ajami said. Perhaps the city could place giant cisterns (a large swimming pool-like structure) beneath its stadiums to collect water. This water could then be used for different purposes, such as watering the grass, or released into the environment, she said.

This cistern idea isn't novel. The grassy mall in Washington, D.C. has a cistern underneath it, Ajami said.

"I see every one of these natural disasters as big opportunities," she said. "At the end of the day, this is an opportunity for the city of Houston to evaluate how it wants to implement 21st-century solutions to 21st-century problems."