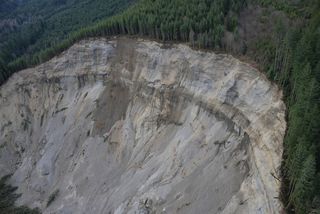 On March 22, 2014, a deadly landslide struck in Washington State, about 50 miles north of Seattle on the banks of the Stillaguamish River.
(Image: © King County Sheriff's Office - Air Support Unit)

Deadly mudslides can unfold in any of the 50 U.S. states, but a combination of geologic factors makes the West Coast especially vulnerable to the type of destructive flow that pummeled northwest Washington on Saturday (March 22), geologists say.

Mudslides generally form when a massive layer of unconsolidated rock becomes waterlogged and slips under the force of gravity. The basic ingredients for a mudslide include large areas of unconsolidated rock, steep mountain slopes, and areas with shallow water tables that quickly become saturated with rain or snow water, particularly during short but intense spurts of precipitation, Noah Finnegan, a geologist at the University of California, Santa Cruz, told Live Science. [See Photos of Washington Landslide's Destruction]

"The reason the West tends to have more landslides than the East is related to all three of these factors," Finnegan said. "In the West, active tectonics make for steeper slopes, the regional climate ensures that moisture is delivered over a relatively smaller portion of the year, and the rocks are often much weaker on the West Coast."

West Coast rocks are generally weaker than those in the East, because Western rocks are younger by millions of years. Through geologic time, the older formations out East have been exposed to extreme pressures and temperatures within the Earth's mantle that have made them harder and more compact than the more crumbly rocks out West, according to Jim O'Connor, a hydrologist with the U.S. Geological Survey in Oregon.

During the last ice age, glaciers on both coasts grinded against rocks and formed a loose sediment layer that sits beneath the top soil. Since the West Coast rock is younger and softer, the glaciers produced larger quantities of loose sand and stones and left behind thicker deposits, whereas the harder East Coast rocks did not give way as easily and did not produce as much loose material. The sediment layer that overlies West Coast terrain is therefore generally thicker and looser than that of the East, and more susceptible to losing grip and giving way to gravity, O'Connor said.

The peaks of old East Coast mountains are generally not as steep than those out west, largely because they have been exposed to millions more years of erosion. Just as river stones become more rounded and less jagged over time as the force of water and other rocks smooth them down, mountains give way to the elements and become less steep through time. Not only have West Coast mountains experienced less long-term erosion, but some are also still tectonically active today, producing fresh, steep cliff faces that continue to grow upward.

The National Weather Service has reported that, in the past 45 days, the region in which the Washington mudslide took place has experienced double its normal rainfall for this time of year, according to USA Today.

Such rapid delivery of precipitation does not allow time for water to flow deep underground, and causes sediment to become saturated much faster than it would if rainfall were distributed less intensely over a wider timeframe, as is more common on the East Coast.

"Rainfall is key," Finnegan told Live Science, explaining that large slides, like the one in Washington, respond to rainfall over weeks to months, whereas small slides respond over hours to days.

While heavy rainfall alone can trigger mudslides, earthquakes also often instigate the flow, and tend to be more common on the more tectonically active West Coast than the East Coast. Officials in Snohomish County, Wash., where the mudslide occurred last week, reported that a 1.1 magnitude earthquake occurred about two weeks before the slide; even so, the U.S. Geological Survey has stated that the earthquake did not cause this event. More likely, recent rain and soil saturation triggered the lethal landslide, the USGS said.