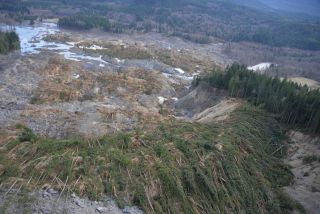 An earthquake is not to blame for the deadly landslide that struck Washington State on Saturday (March 22), U.S. officials say.

There were no earthquakes recorded at the time the rain-soaked hillside in Oso, Wash., collapsed, according to the U.S. Geological Survey (USGS).

Rather, the force of the landslide itself was recorded in seismographic data. Readings show two big wave signals: one from the initial landslide at 10:37 a.m. local time (17:37 UTC) and a second from another slide minutes later at 10:41 a.m. (17:41 UTC). During the hour after the incident, smaller landslides prompted more shaking. [See Photos of the Landslide's Destruction]

Recent rain and soil saturation more likely triggered the disaster, which left a path of destruction that could be seen from satellites in space. If an earthquake had led to the onset of the landslide, geologists would expect to see two high-frequency waves, called a P-wave and an S-wave, in seismograph readings, USGS officials said. The P-wave is the first to emerge from an earthquake. It travels up to 3.7 miles per second (6 km/s) through the Earth's crust, but doesn't produce much damage. The S-wave that follows is only half as fast P-wave; it can cause the destructive shaking associated with an earthquake.

The waves recorded at the time of the Washington landslide were "long period surface waves, with no clear high-frequency P or S phases," USGS officials said in a statement.

As of Wednesday night (March 26), the death toll from the landslide stood at 25, The Herald of Everett, Wash., reported. Another 90 people were listed as missing or unaccounted for.

Debris from the huge slide buried houses as well as nearly a mile-long stretch of State Route 530. The mud and rubble also blocked the North Fork Stillaguamish River, putting the region at risk for flooding.

Large landslides are not uncommon in the western foothills of the North Cascades, according to the USGS. This particular hillside in Oso, about 50 miles (80 km) north of Seattle, has a shaky past, including a landslide in 2006.

Landslides, on average, cause $1-2 billion in damages and 25 deaths each year in the United States, according to the USGS.