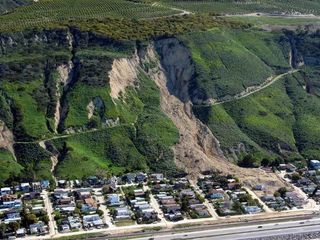 A landslide is soil, rock and other debris giving way to gravity.
(Image: © Mark Reid, USGS.)

When soil, rock, and other earth debris can no longer hold it together and gives way to gravity, landslides happen.

The downward force of a landslide can move slowly, (a mere millimeters per year) or quickly with disasterous effects. Landslides can even occur underwater, causing tidal waves and damage to coastal areas. These landslides are called submarine landslides.

Landslides can be triggered by earthquakes, volcanic activity, changes in groundwater, a disturbance or change of slope. Intense rainfall over a short period of time tends to trigger shallow, fast-moving mud and debris flows. Slow, steady rainfall over a long period of time may trigger deeper, slow-moving landslides. Different materials behave differently, too.

Every year as much as $2 billion in landslide damage occurs in the United States. In a record-breaking storm in the San Francisco area in January 1982, some 18,000 debris flows were triggered during a single night! Property damage was over $66 million, and 25 people died.