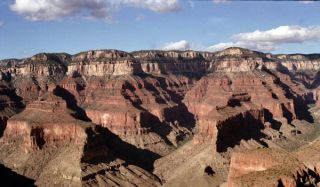 The oldest rocks in the grand canyon are about 2 billion years old, but they are not even half the age of the oldest known rocks on earth.
(Image: © The National Park Service)

You don't need to go to a museum to find really, really old things. Ordinary rocks, for example, may be millions or billions of years old, and are free for the taking. But rocks you're likely find along a nature trail or highway are mere infants compared to the oldest rocks on Earth.

Finding the oldest rocks in the world is a harder task than it might seem. Earth's crust is a dynamic system and is always in motion, so rocks are continually being moved around, created and melted down in the great geological recycling program. The oldest rocks on Earth can be very difficult to find and verify, but the youngest rocks are easy to locate: look for the nearest active volcano.

The oldest whole rocks found so far date back about 4.28 billion years. They were found in 2001 by geologists excavating near Canada's Hudson Bay in northern Quebec, andthe research appeared in the Sept. 25, 2008, issue of the journal Science.

The oldest geological material ever found, which are not technically rocks, are mineral grains called zircons found in Western Australia, which date back about 4.36 billion years.

Technically, the oldest known rocks existing on Earth are not from Earth at all, but are instead of extraterrestrial origin . Moon rock samples collected during the Apollo missions have been dated to about 4.5 billion years, besting our oldest terrestrial rocks by a few hundred million years.