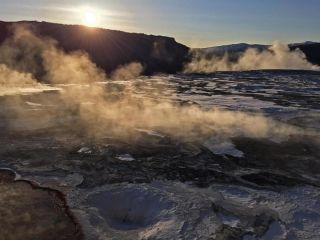 Can rocks grow? The quick answer is yes.

To explain how and why, first let's talk about another important question: What is a rock?

A rock is a collection of minerals. A mineral is a single crystal made up of elements such as silicon, oxygen and carbon. A mineral becomes a rock when multiple crystals are present, whether that rock is composed of many different kinds minerals or whether they’re all the same kind, said John Brady, a professor of geology at Smith College in Northampton, Massachusetts.

Now, how do rocks grow?

Rocks can grow taller and larger

You can find rocks growing taller and bigger in caves and hot springs. In caves, rocks grow because water flowing along walls or dripping from the ceiling leaves behind minerals along the cave wall or floor, said Cory BlackEagle, a geologist at the University of Kentucky in Lexington and chair of the Geological Society of America's Karst Division. Cave rocks are usually composed of minerals such as calcite, aragonite, opal, chalcedony and others. Rocks formed by this dripping water are called stalactites when they grow down from the ceiling and stalagmites when they grow up from the floor. [In Photos: Stunning Stalagmite Structures Discovered in French Cave]

Water also contains dissolved metals, which can "precipitate" out of seawater or freshwater to grow rocks. These rocks are called concretions or nodules. Concretions of manganese, iron, copper, nickel and cobalt are found on the bottom of every ocean. They form layer by layer, like a pearl. (Pearls are technically rocks, even though oysters make them, BlackEagle said.) Each layer makes the concretion a little bit bigger.

Manganese nodules grow very slowly, usually less than 0.3 inches (1 centimeter) every million years. Because they grow so slowly, some of the largest concretions could be 10 million years old, BlackEagle said. Metal concretions also grow in freshwater, usually when water flows through rocks and leaves behind deposits of metallic minerals, such as the Moqui Marbles of the American Southwest. Metal concretions have even been found on Mars.

Rocks can grow stronger and heavier

Metamorphic rocks — which have been heated, put under pressure, or both — can grow stronger (harder to break) and heavier. Metamorphic rocks are one of the three main rock types; the other two are igneous and sedimentary rocks. The minerals in the original rock transform from the heat and pressure (and sometimes new minerals also grow). Metamorphic rocks gain strength when heat and pressure cause their minerals to lock more tightly together. Also, a rock's density may increase if it undergoes pressure — packing the same amount of material into a smaller space (volume). "This makes a piece of the metamorphic rock feel heavier than the same-sized piece of the original rock," BlackEagle said.

In some parts of the world, the soil seems to produce more rocks than vegetables.

"I had a landlady that thought her garden grew rocks because she would pick the rocks out each spring, and the next spring there would be more rocks," Brady recalled. What's really going on involves some combination of causes that push rocks up from beneath the earth, such as frost heaving (an upward swelling of soil), slow erosion or turnover of the soil. Over time, these effects churn the soil, pushing rocks buried underground up to the surface to plague gardeners.