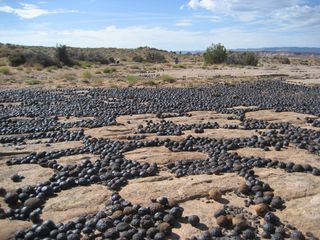 Hikers rambling through Utah's candy-striped canyons sometimes come across a strange-looking sight. Where the Navajo Sandstone loses its iconic peach, orange and red stripes, hundreds of round, iron-coated stones often litter the ground.

The stony spheres are concretions — sandstone balls cemented by a hard shell of iron oxide minerals. Often called moqui marbles, acres of the chocolate-colored rocks are scattered across Utah and Arizona. They tumble from the pale, cream-colored Navajo Sandstone beds, when wind and water wash away the softer rock.

For decades, the rocks were simply a geological oddity. Then, look-alikes were discovered on Mars (the so-called Martian blueberries). The milestone — among the early evidence for water on Mars — boosted interest in Earth's iron baubles. [Photo Gallery: See Fantastic Moqui Marbles]

Now, a new study reveals that the moqui marbles are no more than 25 million years old — a sharp contrast to the 190-million-year-old Navajo Sandstone. Marbles scattered on sandstone slopes in Grand Staircase-Escalante National Monument are only 2 million to 5 million years old. And on Arizona's Paria Plateau, the marbles' iron oxide rind is as young as 300,000 years old, researchers report in the September 2014 issue of the Geological Society of America Bulletin.

"They really represent a record of how water moved the rock millions of years ago, and the next generation can use them to understand water and life on other planets," said Marjorie Chan, co-author of the new study and a geologist at the University of Utah in Salt Lake City.

The moqui marbles' precise ages come from a radioactive clock. The iron oxide minerals contain traces of radioactive uranium and thorium, and these decay by expelling helium. Tallying the elements reveals the time since the minerals formed. The innovative technique may help resolve different models of how the stone spheres formed. Scientists agree that the iron comes from the bone-white Navajo Sandstone layers, stripped bare of their mineral paint by percolating groundwater. A subtle film of hematite, or iron oxide, colors the iconic red cliffs and canyons.

Chemical reactions fused the moqui marbles with iron, but the details haven't been settled. Some researchers now think tiny microbes spurred the chemical process, and that similar concretions on Mars may one day reveal signs of ancient life. [The 7 Most Mars-Like Places on Earth]

"The discoveries on Mars helped push us to better understand the setting here on Earth, and what we do on Earth feeds back into helping interpret Mars," Chan told Live Science.

Concretions of all shapes and sizes are found all over the world. The curious rocks have inspired fantastical tales of fairies, meteorites and dinosaur eggs, but their origin is fairly mundane. Water flowing through sedimentary rock leaves behind minerals that glue together masses of sand, mud or other particles. Sometimes, a treasure — like a bone or a shell — hides inside.

The moqui marbles crop up in the Navajo Sandstone in Arizona and in Utah's public lands, eroding from the spectacular white cliffs in Zion National Park and the Grand Staircase-Escalante National Monument. Collecting concretions in the parks is prohibited.

The iron stones appear almost black, with a pitted surface polished by blowing sand. Other rusty structures formed too, including discs, "flying saucers," pipes and flat plates. Spiritualists have endowed the marbles with "energy" and dubbed the distinctive shapes as male and female, making them among the only rocks with a gender. Quietly sitting and holding one in each hand is said to calm the spirit, just like meditation.

"I don't believe that," Chan said. "I do believe these are important resources, and the geologic landscape is our heritage."

The Navajo Sandstone was once the biggest expanse of dunes on Earth. Its color comes from flakes of iron-rich minerals blown in and buried with the quartz sand. After the dunes were blanketed and buried by younger geologic layers, the iron enrobed the sand grains, giving the Navajo Sandstone its amazing colors and patterns. [Image Gallery: Majestic Monument Valley]

Eons later, the moqui marbles were born. The concretions owe their existence to massive tectonic shifts in the Southwest, researchers think. Some 20 million years ago, the Colorado Plateau started to bob up like a cork. The entire plateau has lifted about 1.2 miles (2 kilometers).

The tectonic uplift warped its rock layers, trapping oil and gas. When a mixture of water and natural gas flowed through the Navajo Sandstone, it stripped away the rusty coating, bleaching the rocks from red to creamy white. Chan thinks this iron-rich water crept through the sandstone until it reached a crack, hole or layer where the water chemistry was different and iron settled out of the water.

The chemical reactions first covered each sand grain with iron, creating tiny spheres. The spheres grew, layer by layer, making contact with others nearby until some spheres connect into one large mass. Collectors on private property sometimes find odd, knobby clumps that appear to be partially formed spheres, where the process may have halted halfway through.

"These round concretions have a self-organizing pattern, like people at a party," Chan said. "The natural pattern is for people to gather together in conversation groups, and the groups are going to be round."

The results of the new study suggest that the first iron-oxide batch formed 20 million to 25 million years ago, and the next set was added 2 million to 3 million years ago. This younger group matches up with another major event: It's when the Colorado River started cutting through the Navajo Sandstone near the mouth of the Escalante River, which likely changed groundwater flow through the region. These younger marbles are mostly goethite instead of hematite, which may reflect the changing chemistry of the groundwater.

The younger ages also support a different model for how the concretions formed, according to David Loope, a geologist at the University of Nebraska-Lincoln, who was not involved in the study. Loope thinks the moqui marbles were transformed by microbes, morphing from one kind of mineral to another as the region's groundwater chemistry changed.

According to Loope's model, the marbles were originally siderite, an iron carbonate mineral. The same fluids Chan said had bleached the sandstone deposited the carbonate spheres, only with an added boost of carbon dioxide gas dissolved in the water. When the Colorado River sliced into the Navajo Sandstone 2 million years ago, the groundwater flow and the mineral levels shifted.

The researchers think bacteria helped convert the siderite into hematite. With a powerful microscope, the researchers also discovered tiny structures suggestive of microbial life inside the concretions, similar to tubes seen in Martian meteorites. Some of the hematite rinds resemble siderite crystals — a clue that one mineral ousted the other, Loope and his colleagues reported in August 2012 in the journal Geology. "We are completely convinced the concretions had siderite precursors," Loope said.

Link to the past

"Moqui" is a Hopi word that means "dear departed ones." According to Hopi tradition, spirits of the dead would play with the marbles at night, leaving them behind in the morning to reassure the living that they were happy in the afterlife.

Just as the moqui marbles embody the Hopi idea of life after death, the iron stones are links to ancient environments on the Colorado Plateau. With the new dating technique, Chan has shown that scientists can start to pinpoint where and when water flowed through rock. The search for historic water routes in the Southwest has engaged researchers for more than century, since the first geologists tried to puzzle out how the Colorado River carved the Grand Canyon.

"A lot of people are just fascinated by these concretions, and maybe geologists haven't been able to take them seriously in the past," Loope told Live Science. "I think they pretty clearly hold a lot of information."