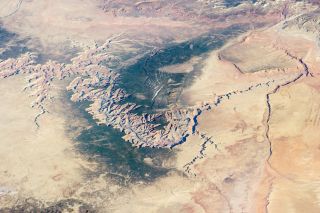 The Grand Canyon as seen from the International Space Station on Marc h 25, 2014.
(Image: © Courtesy ISS Crew Earth Observations Facility and the Earth Science and Remote Sensing Unit, Johnson Space Center. The image was taken by the Expedition 39 crew.)

Helicopter tours of the Grand Canyon can provide a bird's-eye view of the iconic landmark. But that's nothing compared to what astronauts see as they zip over northern Arizona in the International Space Station.

In a new image taken from orbit, the Grand Canyon is visible slicing through the Kaibab Plateau, which is part of the expansive Colorado Plateau of Arizona, Utah, Colorado and New Mexico. The photograph was taken by the Expedition 39 crew aboard the ISS on March 25, 2014, according to NASA's Earth Observatory.

In the image, the canyon's forested North and South Rims are visible on either side of the canyon. The popular South Rim, which hosts about 90 percent of the Grand Canyon's 5 million visitors a year, averages about 7,000 feet (2,134 meters) in elevation, according to the National Park Service. The remote North Rim is about 1,000 feet (305 m) higher. Its cooler climes mean that roads to the North Rim are closed October through May each year.

Between the two rims, the Grand Canyon plunges a mile (1.6 km) through layers of schist, sandstone, limestone and more. The Colorado River carved the 227-river-mile (446 kilometers) canyon over millions of years as the Colorado Plateau experienced a tectonic uplift. The amount of time it took to carve the Canyon is a matter of major debate. On one side are researchers who see the canyon as "young" — The gorge as it is today is about 6 million years old, carved out by the Colorado River after it changed course some 11 million years ago. But some research points to sections of the canyon dating back 70 million years. Some researchers see these old sections as evidence of the origin of the Grand Canyon, while others argue that they are in fact "paleo-canyons" carved long ago that the Colorado River simply found and flowed into. Others argue that these sections represent the origin of today's canyon. The debate is intensified by gaps in the geological record and recent, complicated tectonic changes in the region.

Whatever its age, the Grand Canyon's beauty remains a draw, even from space. The earthbound can get a close-up look at the canyon for free this weekend (April 19 and 20) for National Park Week.