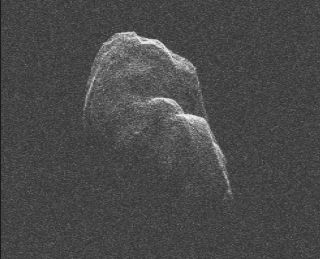 An asteroid will hit the Earth, but don't worry about it.
(Image: © NASA/JPL-Caltech)

This is the question we get most often around here, in one form or another. Often it comes from someone who is really, really worried (and you can blame the media for the outsized concerns).

So first things first: Don't worry. Now for the answer: Yes. And no.

Yes, an asteroid will hit Earth. In fact ten of them as big as refrigerators streak into the atmosphere every year. Most burn up on the way in, and about two-thirds of the rest (or chunks of them) fall harmlessly into the ocean (because the planet is about two-thirds ocean).

Many smaller rocks plunge to the surface routinely (interestingly, about one rock from Mars arrives on Earth each month).

Some of these rocky extraterrestrials hit land but do little if any notable damage (Meteor Crater in Arizona is a big exception, but that was 50,000 years ago). Now and then a piece from a space rock plunges through someone's roof. There are no credible reports of anyone ever being killed, however. A horse in Ohio is said to have died in this way, but that was way back in 1860.

And yes, a larger deadly asteroid could eventually strike.

But no, a continent-destroying asteroid is not likely to hit during your lifetime. Most of 1,100 or so that could do the job have been found. And none are on their way. Okay, there is one mid-sized rock — called Apophis — that has a small chance of striking Earth in 2036 and wreaking some regional havoc.

But astronomers are watching it and, if future observations reveal it really could hit us, scientists are confident they can devise a mission to deflect it. And if all else fails, some futurists suggests, humanity could simply set up shop elsewhere.

The real worry, if you want to worry about something, comes from comets.

Unlike asteroids, which orbit the Sun mostly in a neat belt between Mars and Jupiter and are relatively easy to find, comets hide in the far outskirts of the solar system. When they venture our way, we typically don't know about them until they are nearly upon us.

Still, the odds are you're more likely to be killed by a dog, or by legal execution or by simply falling down than by being struck by any sort of space rock.

Editor's Note: This page will be updated if the situation changes. We promise. No coverups.