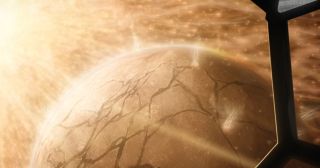 Mitochondria: totally real cell organelles that convert sugars, fats and oxygen into usable energy for cells. Midi-chlorians: completely made-up and widely derided microscopic life-forms that give Jedi warriors their ability to use the Force in the "Star Wars" movies.

See the difference? A handful of "peer reviewers" apparently didn't, as a paper that subbed in "midi-chlorians" for "mitochondria" got accepted into four journals this week. The paper mashed up lightly altered text from Wikipedia on mitochondria with Star Wars-related rambling, including the infamous monologue on the tragedy of Darth Plagueis the Wise from "Revenge of the Sith."

The paper was a hoax written by the so-called Neuroskeptic, who blogs pseudonymously for Discover magazine. The point? To expose "predatory journals," which claim to offer peer-reviewed, open-access publication but in fact publish almost anything for a fee, according to the Neuroskeptic. [Nice Try: Top 5 Retracted Science Studies of 2016]

"It's all about money," said Jeffrey Beall, a research librarian at the University of Colorado Denver who has long worked to expose predatory publishers. In many cases, Beall said, the peer reviewers who are supposed to check the papers submitted to these journals don't even exist, or the owner of the journal poses as the reviewers. [Dog 'Scientist' Sits on Editorial Board of Medical Journal]

Neuroskeptic's sting isn't the first to expose these journals for what they are. These journals make a profit by charging authors fees to publish; as the papers are published online only, the publishers' cost is minimal. They often spam researchers' email accounts with solicitations to publish. In one case, a predatory journal actually accepted paper by two researchers that just read "Get me Off Your F---ing Mailing List" over and over again. In another sting, researchers made up a fake scientist, Dr. Szust (Polish for "fraud") and got her onto the boards of 48 separate predatory journals.

Inspired by these stings, Neuroskeptic put together a fake paper mixing up mitochondria and midi-chlorians, even admitting in the text that most of the wording had been stolen from Wikipedia. A sample:

"Midichlorians-mediated oxidative stress causes cardio-myopathy in Type 2 diabetics. As more fatty acids are delivered to the heart, and into cardiomyocytes, the oxidation of fatty acids in these cells increases. Did you ever hear the tragedy of Darth Plagueis the Wise? I thought not. It is not a story the Jedi would tell you."

(The tragedy of Darth Plagueis the Wise, a monologue by the actor Ian McDiarmid playing the character of Palpatine, became a meme among "Star Wars" fans in early 2017.)

The Journal of Translational Science, Advances in Medicine and Biochemistry & Physiology: Open Access rejected the paper. JSM Biochemistry and Molecular Biology requested Neuroskeptic revise and resubmit the paper; whoever read it there got the joke and asked that the revised paper include such citations as Palpatine, et al. 1980. Meanwhile, the Journal of Molecular Biology and Techniques (not to be confused with the Journal of Molecular Biology) simply asked that "midichlorians" be changed to "mitochondria" and that the paper be resubmitted. Representatives of the all of these journals did not respond to requests for comment.

"They just really want to earn the money from the authors, so they find any way they can to accept the papers," Beall told Live Science of predatory journals.

Most predatory journals are headquartered overseas, and there is no real way to combat them legally, Beall said. Instead, organizations such as Think, Check, Submit encourage researchers to look for warning signs that a journal isn't legitimate. These signs include journals with titles very similar to the names of big journals in a field, often with just an extra word added, Beall said, or with websites chock-full of grammatical errors.

The journals hurt science by luring in unsuspecting researchers and charging them to publish, Beall said. Some scientists also exploit predatory journals to pump up their publication count in order to secure jobs and promotions.

"This really hurts the researchers who publish in the top journals and who do honest research," Beall said.

Not all references to midi-chlorians are a sham, though: A group of bacteria discovered in 2004 are known as Midichloria. They live inside ticks — but probably don't give those bloodsuckers the ability to use the Force.