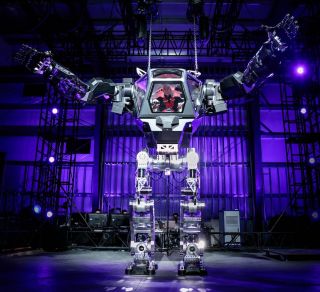 Amazon CEO Jeff Bezos got to live out every 6-year-old's fantasy when he got behind the controls of a giant "mech" robot.

The Verge reports that Bezos tried out the 13-foot-tall (4 meters) robot yesterday (March 19) at his company's private Machine Learning, Home Automation, Robotics and Space Exploration (MARS) conference. Video of the bot, developed by Hankook Mirae Technology in South Korea, first surfaced in December in promotional clips. Live Science was skeptical of the robot's existence and functionality at the time.

But the new video reveals that the robot does, indeed, exist. However, it's far from clear how much the mech (a term for piloted, humanoid robots) can really do. Bezos flails the arms around using controls in the robot's torso cockpit, but the robot does not take any steps and is tethered to the ceiling, presumably for safety reasons. [The 6 Strangest Robots Ever Created]

The robot does not pick anything up in the video, either, which is notable because its developers say that one of their goals is to create piloted robots for real-world jobs, like cleaning up the Fukushima nuclear power plant that was damaged in 2011 when a massive earthquake and tsunami struck Japan. So far, none of the footage of the mech has shown it manipulating objects. The massive bot also runs on external power, which means that, so far, it's unable to work untethered.

Such limitations could be overcome. Roboticists have already developed robots that can navigate uneven terrain, including Boston Dynamics' intimidating "Big Dog" and the bipedal "Atlas" humanoid robot. Atlas can open doors, lift boxes and even right itself when pushed, and operates with an internal power source. Those bots are much smaller than the giant mech Hankook Mirae is trying to develop, however, and don't present the same safety challenges as a piloted robot. According to Hankook Mirae's website, the mech robot, nicknamed Method 2, weighs a minimum of 1.6 tons.

A designer affiliated with Hankook Mirae, Vitaly Bulgarov, told Live Science in December that the giant mech has been under development for several years and is a prototype made to show off particular technologies, like the human-machine interface that controls the arms.

In that case, the mech may never be used for more than demonstration purposes, while the individual technologies used to make it might be redirected to more practical designs.

Whatever the ultimate function of the robot, it certainly taps into human fantasies of what robots should be. Mechs like the Method 2 design appear in the 2009 film "Avatar" as well as in "Starship Troopers" (1997) and in "Pacific Rim" (2013). The character of Ripley (played by actress Sigourney Weaver) also uses one in the classic sci-fi film "Aliens" (1986), which Bezos referenced during his ride in Method 2.

"Why do I feel so much like Sigourney Weaver?" Bezos quipped.