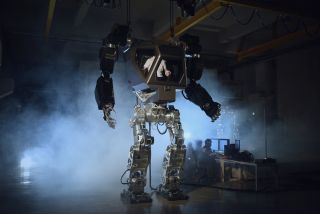 New video clips purporting to show a 13-foot-tall (4 meters) humanoid robot piloted by a person in its torso look like something straight out of "Avatar" or "Transformers," but a Live Science investigation has revealed reasons to believe some skepticism might be in order.

The robot clips have been picked up by a variety of online news and technology outlets, including Kotaku and Wired UK. But the South Korean company that is supposedly developing the robot has virtually no online presence and was unfamiliar to robotics researchers contacted by Live Science.

Furthermore, the only source for the videos or any information about them is the Facebook and Instagram pages of a designer whose website mentions a conceptual art project about a "fictional robotics corporation that develops its products in a not-so-distant future."

The designer, Vitaly Bulgarov, told Live Science that the robot is real. However, he declined to share the names of scientists or engineers working on the project, and messages to the purported CEO of the company went unreturned. [Gallery: See Images of the Giant Humanoid Robot]

According to Bulgarov's Facebook page, the videos were taken in South Korea at a company called Korea Future Technology. Almost all references to this company online appear to be associated with Bulgarov's posts and the subsequent news pieces on the robot. Bulgarov said the company has been operating for several years.

The domain name of the supposed company, found on Bulgarov's file names, hankookmirae.com, meaning "South Korea Future," was registered in February to is Lim Hyun Kuk, the name of the person Bulgarov said was CEO of the company. There is no active website associated with the domain; Bulgarov said one is slated to go online next week.

"If you look at this from a Western point of view, then yeah, that might seem strange, but in that part of the world, the culture is a little different. The company wants to make something first before they advertise themselves," Bulgarov said of the inactive website. [Gallery: Disaster-Response Robots Face Off]

The person who answered the phone number associated with the domain registration said Lim worked at that address but was not available to talk. Lim did not return a message left at that number or emails sent to three addresses possibly associated with him.

Bulgarov told Live Science in an email that the release of the videos was intended for his circle of followers only, and that the company would do a "proper press release" when the robot is completed in 2017. He said a "Professor Park" was associated with the work but would not provide a given name or affiliation for that researcher. ("Park" is the third-most-common surname in Korea.) He also declined to answer questions about funding for the project.

"Frankly, right now, we don't even really care if people think this is legit because we didn't try to promote it," Bulgarov said.

The robot itself looks like one of the military robots in the movie "Avatar." A pilot inside the torso moves his arms to control the robot's upper limbs. (This kind of design is known as a "mech.") The robot is tethered by a power cable above, but walks several steps in the video clips. [The 6 Strangest Robots Ever Created]

The technology shown in the video is plausible, said Ronald Fearing, a professor of electrical engineering and computer science at the University of California, Berkeley, who has developed a jumping robot.

The robot looks a bit top-heavy, Fearing said, but its external power source could mean it would be light enough to function. The idea of developing robots steered by a person inside goes back to at least the 1960s, Fearing said. Several research teams are developing robotic exoskeletons to help people lift heavier loads or to allow paralyzed people to walk again.

Bipedal robots much more graceful than the one shown in the new video are already a reality. Robotics company Boston Dynamics has Atlas, an approximately human-sized bipedal automaton that can even navigate rough ground. And Georgia Tech's DURUS robot walks with a heel-to-toe gait, just like a human.

Fearing said the technology in the video would be a "nice piece of work." He estimated that something like it might cost $20 million and take a couple of years to make.

But there are also questions about the video. Though Bulgarov wrote on his Instagram page that the ground shakes as the giant robot walks, the camera and nearby objects appear steady. The lab itself is also remarkably sleek and futuristic compared to academic labs in the United States and even industry labs like those of Boston Dynamics.

"Robots are messy business," said Christian Hubicki, a postdoctoral robotics researcher at Georgia Tech who worked on the DURUS robot. "They get torn apart and put back together over and over, and transmission grease gets all over the place. Even the nice white floor is beautifully unscuffed [in these videos]. Never once during likely hundreds of hours of debugging the giant robot did it kick in a way that scratched it up?"

The people around the robot also appear to be too close for safety and are not following the standard practice of wearing safety goggles, Hubicki said.

Bulgarov said the company's CEO required that the lab be clean, and that the videos had been brightened in postproduction. Fearing said robotics labs in Asia can be relatively neat.

However, there's another problem: Hubicki told Live Science that the robot's leg joints look unusually smooth given the force that the step of a 1.5-ton robot would exert on the motors. [5 Reasons to Fear Robots]

"When I look at the bulk of the leg — say, above the ankle — it still stops its downward motion extremely quickly (I think within a frame of the video)," Hubicki wrote in an email. "[N]ot impossible, but if it is real, I'd be really curious about how the effects of that impact are being handled."

Bulgarov said dampers in the robot's feet make its motion smooth. He also said the robot wasn't built for use as is but as a platform to show off various technical feats, like the human-machine interface for moving the arms or the bipedal locomotion. Right now, he said the robot couldn't walk on an uneven surface but might be useful for industrial purposes, though there are no plans to use the robot in its current state. The cockpit and arms could be attached to a wheeled vehicle for rough terrain, Bulgarov said. The company is considering applications such as cleanup at the Fukushima power plant, which was damaged during the 2011 tsunami in Japan, Bulgarov said.

Some companies do make demonstration robots without many practical applications, Fearing and Hubicki said. However, building a 1.5-ton robot for this purpose would be a quite extreme, Hubicki added.

"To me, building a giant, walking mech to showcase your arm technology is a bit like building a rocket ship to demonstrate your cockpit technology," he said.

When asked directly if the robot was real, Bulgarov said, "It is real, and more footage is coming."

Fearing wondered if perhaps the company was intentionally obscuring its origins and goals to create more interest. There have also been situations where companies have exaggerated reality, he said.

"I don't know of this group, but unfortunately, I know other groups have mixed CAD [computer-aided design] images and reality to raise money and [have] not disclosed the mixture," Fearing said.

Hubicki urged skepticism. "As intriguing as the video is," he said, "at some point, you have to ask yourself, 'Did a secret company with no obvious ties to existing humanoid robotics groups actually develop a giant humanoid robot with likely unparalleled power and torque, and instead of sending out a press release, they unveil the robot by dribbling out low-resolution videos on Instagram via an affiliate who just so happens to be a visual effects artist?'"