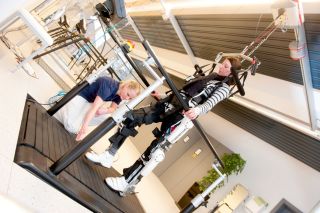 A futuristic-looking robot suit that has its own mechanical "limbs" may help paralyzed patients walk again.

The robotic exosuit, called HAL for “Hybrid Assistive Limb," was originally developed in Japan, but has now been tested on paralyzed patients at the Center for Neurorobotic Movement Training in Bochum, Germany.

When a person wants to move, the brain sends a signal through the spinal cord and the nerves that surround it, to a muscle in a body part such as a leg or an arm. However, in paralyzed patients, these spinal nerve structures are damaged, and the muscles operate with signals that are too weak to reach the leg or the arm. This is why these patients cannot walk or move certain body parts. [Super-Intelligent Machines: 7 Robotic Futures]

But the HAL robot suit can actually pick up these weakened signals through sensors that are attached to a patient's skin, and can set its motors, located in the pelvic and knee-joint regions, in motion. This effectively connects the robotic suit to the patient's nervous system and helps the individual to regain some mobility.

"This exoskeleton robot suit differs from other exoskeleton systems in its unique and successful neuronal control directly by the patient," said Dr. Thomas Schildhauer, medical director at the Bergmannsheil, a university hospital in Bochum. "[T]he patient is in 'direct control' of the robot and is not passively moved by the robotic exoskeletal system."

The robot suit is already being used at the Bergmannsheil by paraplegic, quadriplegic, stroke and muscular dystrophy patients in controlled trials, he said. (Paraplegic patients can move their arms, hands and fingers, whereas quadriplegic patients have limited movement or no movement from the neck down.)

"In some subgroups of spinal cord injury patients the application is already very successful, whereas the other patient groups are still under formal investigation," Schildhauer told Live Science.

Schildhauer was surprised by "the amount of functional gain in some subgroups of chronic spinal cord injury patients," he said. For instance, a wheelchair-bound patient may be able to walk short distances with the support of a walking frame after training with the exosuit five times a week for three months, the researchers said.

The Bergmannsheil is the only hospital in Germany where the robot suit has been used. Similar suits have been tested in about 200 geriatric rehab centers in Japan.

The HAL was developed by Dr. Yoshiyuki Sankai, a professor in the Graduate School of Systems and Information Engineering at the University of Tsukuba in Japan. Sankai also founded Cyberdyne Inc. (from "cybernics" — an interdisciplinary research field that incorporates cybernetics and other disciplines), a company that produces the HAL. Sankai designed the robot "for the benefits of humankind in the field of medicine, caregiving, welfare, labor, heavy works, entertainment and so on," according to Cyberdyne's website.

Sankai has said in the past that he aims to create new technologies that will benefit people and not serve to destroy them. For instance, he reportedly rejected offers from the U.S. Department of Defense and the government of South Korea to develop robots for military use.

Research describing the application of the robot suit in paralyzed patients was published in April in the Spine Journal.