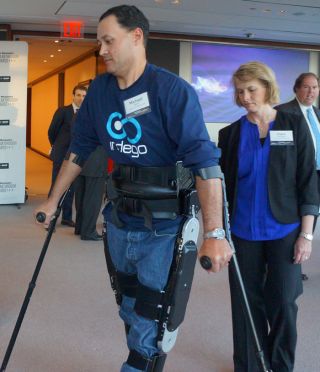 Michael Gore tripped about 11 years ago and his life changed. Since his accident, Gore hasn't been able to walk, but now, thanks to a new robotic suit, he can stand upright, sit and walk at will.

The flexible and supportive Indego Exoskeleton is designed to help people rehabilitate after an injury or allow people with paralysis like Gore to walk again. Gore has been working with a version of the exoskeleton since 2010, when he was in rehab at the Shepherd Center in Atlanta.

"It feels great," Gore, a T10 (thoracic spinal nerve 10) complete paraplegic, told LiveScience of the exoskeleton. "It's a feeling you forget when you're in a chair for so long. It's very exciting." [Super-Intelligent Machines: 7 Robotic Futures]

The exoskeleton worn by Gore attaches at the ankles and up the legs to his torso. Electric motors drive the hip and knee joints, while either leaning forward or backward controls the motion of the machine.

Exoskeleton wearers use arm braces to keep themselves steady during movement.

The new device is the culmination of decades of work in robotics, according to Ryan Farris, another one of the exoskeleton developers.

"There have been attempts at making wearable robotic suits back in the '70s even," Farris told LiveScience. "It's really a confluence of technology advancements … advancements in motor technology, battery technology, sensor technology that enable this device to come together as it has. Our goal at Vanderbilt University when we were developing this … was to make something that, if we were in the condition to need it, we would actually want to use it. So we tried to pay attention to the user experience."

Parker Hannifin Corp. licensed the technology for the exoskeleton, and the company is now in the process of developing and releasing the Indego Exoskeleton — the commercial version of Vanderbilt's original idea.

The new device will be lighter than the original 27-pound (12 kilograms) suit and can be put on in five minutes or less. Set for release in the spring, users of the new version of the suit will be able to break it down into small components that can fit into a case about the size of a carry-on piece of luggage, Farris said.

Paraplegics aren't the only people who could benefit from the exoskeleton. It could also help people recovering from a spinal cord injury learn how to walk again.

"For somebody with an incomplete spinal cord injury or recovering from a stroke or even multiple sclerosis, we have a separate mode and software where we can switch it so the device doesn't walk for you," Farris said. "It actually follows you and follows your intentions so you have to put out effort and it forces you to participate in the training process. That's necessary to reconnect the neural pathways for neural recovery."

"They have to intend to walk, and they have to make the effort and then we support them only as needed," Farris added. "The device is intelligent enough that as they get stronger, it weans them off of the support from the device so eventually they're walking on their own."

Giving people with spinal cord injuries the ability to walk again has major health benefits, Farris said. Wheelchair-bound patients can be plagued with loss of bone density and other health issues that walking — even for a short amount of time — can combat.

There are other exoskeletons on the market now. The ReWalk bionic suit, developed by Argo Medical Technologies in Israel, allows wearers to sit, stand and walk. It's available in Europe, but is currently awaiting clearance by the Federal Drug Administration in the United States.