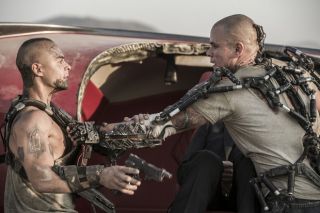 In the upcoming movie "Elysium," starring Matt Damon and Jodie Foster, the main character, Max (Damon), has fallen ill, and in his weakened state, he is unable to get to the space station Elysium where he could be cured.

To help, the other characters put Max in an exoskeleton, a sort of automated body armor that augments his strength and speed, also helping him to move as his illness becomes ever-more debilitating.

That isn't too different from how real-life exoskeletons work, experts say.

In fact, the exoskeleton in "Elysium" was at least partially modeled after the HULC, or Human Universal Load Carrier, an exosuit designed by Ekso Bionics and Lockheed Martin for military use. [Space Station Science: Could Humanity Really Build 'Elysium'?]

The HULC consists of leg braces and a back brace with motors at the knees and hips. It's designed to let wearers carry up to 200 pounds of extra weight on their backs, and to redirect the force of all of that weight into the ground.

Scanners in the HULC monitor the wearer's movements so that the device compliments the wearer's actions. For example, each time the wearer takes a step the HULC's leg motors have to move fast enough that they don't impede the wearer's stride. But if the suit moves too fast, it could overextend the wearer's limbs and cause serious damage.

However, the exoskeleton in "Elysium" differs from the HULC in important ways. For one, the HULC doesn't include arm braces. And according to Nathan Harding, co-founder and CEO of Ekso Bionics, the "Elysium" exoskeleton appears to be working in a way that more closely resembles a medical exoskeleton than a military one.

"With a military exoskeleton, you're trying to carry external loads, trying to help people do things" that a normal human wouldn't be capable of doing.

Medical exoskeletons, by contrast, are designed to help people with muscular impairments, such as paraplegia, to regain some of their mobility. In those cases, the device does not augment a person's muscles, but instead compensates for them or even replaces them entirely in some cases.

That's not to say the two technologies should not be mixed; Ekso Bionics is currently developing exoskeletons for people who can move only one side of their bodies, such as stroke survivors.

In these types of suits, one side would be more military-like, in that it would augment the user's existing functionality, while the other side would be medical.

"Elysium" diverges from modern exoskeleton technology in another, even more significant way.

"They seem to be installing [the exoskeleton] into his bone structure," Harding told LiveScience, after watching the trailer for "Elysium," which hits theaters this Friday (Aug. 9).

In the film, Max undergoes an operation in which parts of the exoskeleton, including some type of brain-machine connection, are drilled into his body.

"That's kind of a different approach than is currently going on in an exoskeleton," said Harding.

"Different" is putting it mildly. Aside from the bodily injury and risk of infection that such an operation would entail, drilling into a human body to affix an exoskeleton would go against what the exoskeleton is there to accomplish, Harding said.

Exoskeletons "are designed to provide an alternative that … basically takes the load off the infrastructure of humans," he said. Attaching exoskeletons directly to people's skeletons, he explained, would ensure that any weight they carried remained on their bodies, thus decreasing the device's usefulness.

"Elysium" gives one reason for its surgically implanted exoskeleton, explaining that the device interfaces with the wearer's brain. "Hook this into your nervous system, and it'll make you strong as a droid," says one character, as he prepares to operate on Max.

But human-computer interfaces are a whole other matter entirely. From a purely structural perspective, surgically installed exoskeletons are "intriguing, but I don't see that part of it being useful," Harding said.

Nowadays, it's fairly common to see something like an exosuit in a movie, even if the characters call it something else.

The "Iron Man" movies, "Battleship" and "Avatar" have also featured exoskeletons, and these movies have educated the public on what exoskeletons are and what they do, Harding said.

"When we started in 2005 … people just really didn't know what [exoskeletons] were or what they were doing," Harding said. "And then we went through this phase where everyone under 25 knew what an exoskeleton was because they were seeing them in all these movies. And now we've hit this phase where there are people in investment saying, 'Hey, I've got to have a bionic strategy!'"

Ekso Bionics isn't the only "bionic strategy" out there. A company called Activelink is developing an exoskeleton called Power Loader, a modified version of which will be used in the cleanup around the Fukushima Daiichi nuclear power plant, which melted down after an earthquake in 2011.

NASA is also working on an exoskeleton that will help astronauts walk and control their movements in low-gravity environments. That suit, co-developed with the Florida Institute for Human and Machine Cognition, may also be adapted for Earth use to help paraplegics walk.

Many real-life innovations drew inspiration from films and television, but Harding says exoskeletons aren't one of them.

"We try to look into the future and what you're going to want to do with an exoskeleton, and then build a mechanical structure that makes sense technically to do the job and fit those parameters," he said. "So it's interesting now to see science fiction feeding it back at us and making science fiction look kind of like the reality."