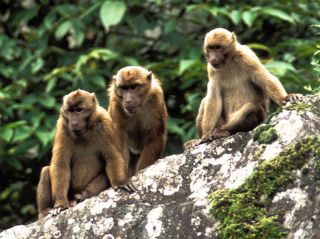 A paralyzed macaque monkey (like those above) controlled its arm using an artificial neural bridge from its brain.
(Image: © M.D. Madhusudan)

A monkey partially paralyzed by a spinal cord injury was able to control its arm using an external link between its brain and spinal cord, a new study shows.

Even after a spinal cord injury or stroke, the nervous system wiring above and below the injury can remain intact. With that in mind, researchers created an artificial electrical connection between the injured monkey's brain and an area below the damaged part of its spinal cord. This allowed the animal to send neural signals to its spinal cord to engage its arm muscles. The findings were detailed online Thursday (April 11) in the journal Frontiers in Neural Circuits.

"In the distant future, it's conceivable that one could get lots of signals in the brain's cortex to trigger lots of stimulation in different spinal sites, and begin to restore some basic functions like grasp and movement," study co-author Eberhard Fetz, a neuroscientist at the University of Washington in Seattle, told LiveScience. But Fetz added that the technology was still a long way off. [Inside the Brain: A Photo Journey Through Time]

Hooking up a monkey

Previous studies have shown that monkeys can use brain signals to control electrical stimulation of muscles that have been temporarily paralyzed, but stimulating the muscles directly caused them to fatigue very quickly. In the new study, the researchers stimulated the spine instead of the muscles, in the hope of restoring more coordinated, natural movement to a macaque monkey with an upper spinal cord lesion. That lesion partially paralyzed one of its upper arms and made the monkey unable to move its fingers independently.

The macaque was trained to move a cursor on a computer screen by flexing its wrist muscles. Later, the animal was trained to move the cursor with its mind alone, via signals recorded from the electrodes in its brain. In contrast to some previous studies that recorded single neurons, this study recorded the combined activity of groups of neurons.

By using the signals recorded from the brain to control electrical stimulation of the spinal cord, the researchers created an artificial bridge between the two areas. The monkey was able to use this bridge to successfully flex its wrist muscles to drive the computer cursor.

Next, the researchers took the weak electrical signals from muscles in the monkey's partially paralyzed arm and fed them back into the spinal cord, creating a self-reinforcing loop.

Though these findings were only in one monkey, they suggest that artificial connections between the brain and spinal cord could restore control of the limbs following damage to the spinal cord, Fetz said. It depends on the kind of injury and the amount of control this method can achieve, he said, but it's a proof-of-concept that a brain-spinal cord connection like this could work.

"It's a small step, but certainly a step in the right direction," said neuroscientist Lee Miller of Northwestern University, who wasn't involved in the study. The movements being demonstrated are very simple ones, Miller said, but "ultimately, spinal cord stimulation may offer promise."