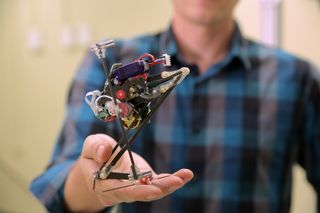 A jumping robot — whose design was inspired by small primates known as bush babies — can spring off walls to gain height faster than any previous robot and could one day help rapidly scan urban disaster zones, researchers say.

Despite being just 10 inches (26 centimeters) tall and weighing only 0.2 pounds (100 grams), the one-legged robot, named Salto, can leap up more than 3.2 feet (1 meter) high from a standing position.

Salto is not the highest-jumping robot out there — some bots can jump to heights of more than 10 feet (3 meters), but those bots have to wind up for several minutes before they leap, whereas Salto can jump again almost immediately, the researchers said. This allows the one-legged bot to push off a wall — much like human parkour enthusiasts — to gain height more quickly, they added. [The 6 Strangest Robots Ever Created]

Salto is also able to climb at a rate of 5.7 feet per second (1.75 meters per second) compared to the 3.7 feet per second (1.12 m/s) achieved by the next-best robot, the researchers said. Salto's climbing rate is slightly better than a bullfrog’s, and it has 78 percent of the capabilities of the tree-dwelling bush baby that it’s modeled on, according to the scientists.

The idea for the robot came to the researchers after they spoke to first responders at an urban search-and-rescue training site in Menlo Park, California, said study leader Duncan Haldane, a robotics Ph.D. student at the University of California, Berkeley.

"Our goal was to have a search-and-rescue robot small enough to not disturb the rubble further, and move quickly across the many kinds of rubble produced by collapsed buildings," Haldane told reporters in a news conference on Monday (Dec. 5). "To do that, it has to be able to jump — and jump more adeptly — than prior robots."

Haldane and his colleagues looked to nature for inspiration, "because it's fair to say animals can outclass any robot when it compares to jumping," he said.

Before they could find the animal that would be the perfect model for their robot, the team had to develop a better measure for jumping ability. The researchers came up with a metric called "vertical jumping agility," which combines how high an animal or robot can jump with how often.

The Senegal bush baby (Galago senegalensis) scored highest in the scientists' tests, leaping from branch to branch at 7.2 feet per second (2.2 m/s). The animal gets its jumping prowess from its ability to get into a superlow crouch before takeoff — a feature that it shares with other jumping animals, the researchers said.

This allows the bush baby's leg muscles to store energy in elastic tendons before releasing it later in the jump to generate 15 times more power than the muscles could alone, they added.

Translating this principle into a robotic system required some tinkering, though, Haldane said. [7 Cool Animal-Inspired Technologies]

"When you are doing bio-inspired engineering, you have to drastically simplify what you are seeing in nature and figure out the fundamental principles of what's going on," he said.

In place of a tendon, Salto the robot features a latex spring that's connected to its motor, which can be twisted to store energy. The configuration of the eight bars that make up the robot's leg means that the leverage it provides changes as the robot moves through the jumping motion, the researchers said.

At the beginning of the jump, while the robot is in a superlow crouch, there is little leverage, so power from the motor goes into twisting the spring rather than pushing off from the ground. As Salto's leg extends, the leverage increases, causing it to push off the ground and release the energy stored in the spring, according to the researchers.

"A crowbar provides you with a lever arm to generate a large prying force by exerting a small force at the end of the lever. It's a force multiplier," said study author Mark Plecnik, a postdoctoral scholar at UC Berkeley. "This is like using a crowbar that grows and shrinks as you are pushing on it."

Sensors on the robot allow it to keep track of its body angle, leg position and motor position, enabling the robot to adjust its angle in flight using a weighted tail so that it hits the wall at the right angle to allow it to spring off again.

"Being able to fight against gravity is always a big problem for terrestrial animals and robots," Ijspeert told Live Science. "Such a system could be useful for applications in field robotics, for example, for search and rescue, pollution monitoring, inspection or agriculture."

The research team that designed Salto hopes that their vertical-agility metric will also help other scientists who are studying jumping animals, said Ron Fearing, a professor of electrical engineering and computer sciences at UC Berkeley, who oversaw the research.

Thomas Roberts, a professor at Brown University who specializes in biomechanics, thinks that it will, but he also thinks that the technology itself could be important for biologists.

"This is a great example of how bio-inspired engineering design can help us build novel devices, but also inform our understanding of biology," he told Live Science.

"In biology, we can only study animals that exist, and we generally assume that systems in nature work pretty well," Roberts said. "Roboticists can test this assumption by building mechanisms that are similar to biological systems, but depart in important ways."

The new study was published today (Dec. 6) in the debut edition of the journal Science Robotics.