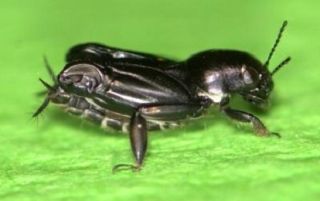 Pygmy mole crickets are skilled jumpers on land and amazingly on water, too. New research shows how their back legs act like spring-loaded paddles to propel them from the surface of a pond.

Researcher Malcolm Burrows, of the University of Cambridge, explained that water can be a deadly trap for many small insects.

"Water grabs and holds an insect, offering it as an appetizing snack for an alert fish. Pygmy mole crickets turn the stickiness of water to their advantage and use this property to enable jumping," Burrows said in a statement.

He collected samples of the species (Xya capensis) from a pond in South Africa and then recorded the insects showing off their jumping skills with a high-speed camera. From watching the footage in slow motion, Burrows saw that the insects have oarlike paddles on their legs that cut through the surface, fan out and send a ball of water downward as their bodies fly into the air.

Burrows said the design and makeup of the pygmy mole crickets' legs could serve as an inspiration for aquatic robots.

"If we want to make small robotic vehicles that move under water, this is how we would have to design propellers or oars," Burrows said in a statement. "We would also have to use a material as good as resilin to impart elasticity, restore shape and reduce drag."

The research appears online this week in the journal Current Biology.