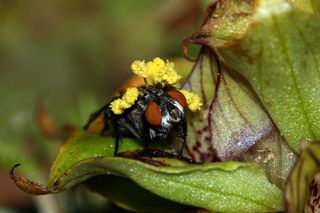 The orchid lures the flies into its carrion-scented boosom so the fly can pick up pollen and deposit it on other flowers.
(Image: © Dennis Hansen)

Timotheüs van der Niet catches flies from roadkill to see which might be carrying orchid pollen.

The orchid has a special smell of roadkill that selectively attracts flesh flies.

The orchid lures the flies into its carrion-scented boosom so the fly can pick up pollen and deposit it on other flowers.

A corpse flower in bloom in 2003 at the United States Botanic Garden. This was the second time the then 10-year-old plant had bloomed; the first was in 2001.

A woman leans over a rafflesia flower, which can reach three feet in diameter and releases a rotting-flesh odor to attract pollinators.

The skunk cabbage (Symplocarpus foetidus) is a member of the arum family, which also includes jack-in-the-pulpit. Pollinators, such as carrion beetles and flesh flies are lured in by the plant's intense heat (which the skunk cabbage generates on its own) and color, which resembles rotting flesh. Its skunky smell also entices these pollinators.

This plant, called the "dead horse arum" produces the stench of rotting meat, attracting carrion-seeking blowflies which act as pollinators.