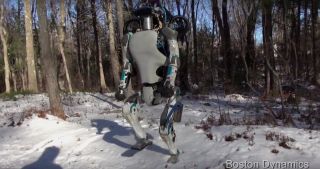 The humanoid Atlas robot, which has been overhauled with a sleeker design, can be seen at the beginning of the video walking around untethered before it opens the front door to Boston Dynamics' office and steps outside. The bot is then seen walking on uneven and snowy terrain, maneuvering around trees and correcting its balance several times. [Watch the Atlas Robot Video]

The new-and-improved robot is "designed to operate outdoors and inside buildings," Boston Dynamics wrote in a description of the video posted on YouTube. "It is specialized for mobile manipulation. It is electrically powered and hydraulically actuated. It uses sensors in its body and legs to balance and LIDAR and stereo sensors in its head to avoid obstacles, assess the terrain, help with navigation and manipulate objects."

Indeed, the video goes on to show Atlas bending down to pick up 10-pound (4.5 kilograms) boxes and pivoting its torso to place each package on a shelf. In another instance, a human handler uses a hockey stick to push Atlas off balance. The robot stumbles backwards (but catches itself) before regaining its balance. Next, an employee pushes Atlas down from behind. The curled-up robot (lying flat on its robotic face) is able to push itself up — first to its "hands" and "knees," before righting its torso and then pushing up on its feet— all without help from a human or a tether. [Robots on the Run! 5 Bots That Can Really Move]

Some commenters on the YouTube video expressed outrage at the guy pushing the robot with a hockey stick, with some saying they felt sad for the robot, some calling the guy a bully and even suggesting, perhaps with a grin, that he will be blamed for any robot uprisings.

"The guy who kicks the robot will be fully responsible [sic] from the forthcoming robot-human wars," wrote Alper ALT.

Another commenter, jonelolguy, wrote: "Man, i actually feel bad for the robot."

"Did anyone else feel pretty sad when they pushed it," wrote Cris Loreto.

These commenters aren't alone in attributing feelings to robots, particularly ones that look lifelike.

Researchers have found that when people watch a robot being harmed or snuggled they react in a similar way to those actions being done to a flesh-and-blood human. In one study, participants said they felt negative emotions when they watched a human hit or drop a small dinosaur robot, and their skin conductance also showed they were distressed at the "bot abuse." When volunteers watched a robot being hugged their brain activity was the same as when they watched human-human affection; even so, brain activity was stronger for human-human abuse versus human-robot violence.

"We think that, in general, the robot stimuli elicit the same emotional processing as the human stimuli," said Astrid Rosenthal-von der Pütten of the University of Duisburg Essen in Germany, who led that study. The research was presented in 2013 at the International Communication Association Conference in London.

Last summer, Boston Dynamics upgraded the Atlas robot for the DARPA Robotics Challenge Finals, a competition hosted by the U.S. military's Defense Advanced Research Projects Agency. The most significant changes at that time were to Atlas' power supply and hydraulic pump, which helps the robot stand, walk around and perform other tasks.

Boston Dynamics, which is owned by Google, said the new version of the Atlas robot now stands about 5 feet and 9 inches (1.7 meters) tall, which is about a head shorter than the version of Atlas used in the DARPA Robotics Challenge Finals, and weighs 180 pounds (82 kg).