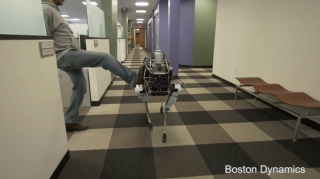 Google-owned robotics company Boston Dynamics recently unveiled its newest animal-inspired bot. Meet Spot — a four-legged robotic dog that can climb stairs, trot over rough terrain and even recover from a well-placed kick to the ribs.

Spot is electrically powered and moves using a system of hydraulic pumps and valves, according to the company, which introduced its new bot to the world yesterday (Feb. 9) via a YouTube video that has already garnered close to 1 million views.

While Spot is significantly smaller than some of Boston Dynamics' other creations — specifically, Big Dog, the company's 240-pound (109 kilograms) all-terrain quadruped robot — this mechanical pup is no lapdog. At 160 pounds (73 kg), Spot weighs as much as the average Great Dane. [The 6 Strangest Robots Ever Created]

Boston Dynamics' video shows Spot casually strolling the hallways of what is likely the company's headquarters in Waltham, Massachusetts. To navigate indoors (as well as outside), the robot uses its head, which is made up of sensors that help it find its way around tough terrain, according to the company.

Spot's head sensors can apparently be used to help the robot steady itself after sustaining a blow. Throughout the video, Spot is dealt a few kicks to the midsection by some non-robot-fearing onlookers. Though the video doesn't mention why the robo-dog was subjected to such abuse, it was likely to demonstrate Spot's ability to right itself instead of toppling over. Robots like Spot and Big Dog are built to travel over uneven terrain, and to be useful in the real world, they need to be resilient and not tip over.

In the company's video, onlookers can be heard cheering as Spot climbs and descends a steep slope without tumbling. The robot also navigates through a patch of trees, walks right through a pile of rocks and sticks, climbs a set of concrete stairs and trots at a brisk pace through a parking lot.

Toward the end of the video, viewers watch Spot climb a small hill alongside Big Dog. The huge robot looks a bit like a lumbering rhino next to the sprightly Spot. However, the company isn't divulging specifics yet on just what its new bot is capable of, so it's unfair to compare Spot to its much larger cousin at this point.

Boston Dynamics has been busy designing new bots as of late. Last month, the Defense Advanced Research Projects Agency (DARPA) announced that the humanoid robot Atlas, which was developed by Boston Dynamics, has been almost completely revamped. Atlas — a two-legged bot that can handle power tools, drive a vehicle and open doors — will be used by seven of the nearly 20 teams competing in the final stage of the DARPA Robotics Challenge in June.