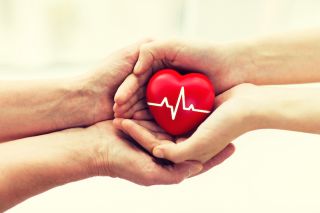 Frozen organs could be brought back to life safely one day with the aid of nanotechnology, a new study finds. The development could help make donated organs available for virtually everyone who needs them in the future, the researchers say.

The number of donated organs that could be transplanted into patients could increase greatly if there were a way to freeze and reheat organs without damaging the cells within them.

In the new work, scientists developed a way to safely thaw frozen tissues with the aid of nanoparticles — particles only nanometers or billionths of a meter wide. (In comparison, the average human hair is about 100,000 nanometers wide.) [9 Most Interesting Transplants]

The researchers manufactured silica-coated nanoparticles that contained iron oxide. When they applied a magnetic field to frozen tissues suffused with the nanoparticles, the nanoparticles generated heat rapidly and uniformly. The tissue samples warmed up at rates of up to more than 260 degrees Fahrenheit (130 degrees Celsius) per minute, which is 10 to 100 times faster than previous methods.

The scientists tested their method on frozen human skin cells, segments of pig heart valves and sections of pig arteries. None of the rewarmed tissues displayed signs of harm from the heating process, and they preserved key physical properties such as elasticity. Moreover, the researchers were able to wash away the nanoparticles from the sample after thawing.

Previous research successfully thawed tiny biological samples that were only 1 to 3 milliliters in volume. This new technique works for samples that are up to 50 milliliters in size. The researchers said there is a strong possibility they could scale up their technique to even larger systems, such as organs.

"We are at the level of rabbit organs now," said study senior author John Bischof, a mechanical and biomedical engineer at the University of Minnesota. "We have a way to go for human organs, but nothing seems to preclude us from that."

However, this research will likely not make it possible to return frozen heads back to life anytime soon, if ever, the scientists noted.

Since the first successful kidney transplant in 1954, organ transplantation has saved the lives of hundreds of thousands of patients. If it weren't for the large and growing shortage of donor organs, the life-saving procedure might help even more people. According to the U.S. Organ Procurement and Transplantation Network, more than 120,000 patients are currently on organ-transplant waitlists in the United States, and at least 1 in 5 patients on these waitlists die waiting for an organ that they never receive.

Right now, the majority of organs that could potentially be used for transplants are discarded, in large part because they can only be safely preserved for 4 to 36 hours. If only half the hearts and lungs that are discarded were successfully transplanted, the waitlists for those organs could be eliminated in two to three years, according to the Organ Preservation Alliance.

One way to save donated organs for transplantation is to freeze them. Ice crystals that can damage cells typically form during freezing, but in prior work, researchers have found a technique known as vitrification — which involves flooding biological specimens with antifreeze-like compounds — that could help cool down organs to stave off decay, while also preventing the formation of ice crystals.

Unfortunately, ice crystals can also form during the reheating process. Moreover, if thawing is not uniform across samples, fracturing or cracking may occur. Although scientists had developed methods to safely use freezing-cold temperatures to "cryopreserve" tissues and organs, they had not yet developed a way to safely reheat them. [5 Amazing Technologies That Are Revolutionizing Biotech]

In future research, scientists will attempt to transplant thawed tissues into living animals to see how well they do. "From my perspective and my collaborators' perspective, there is no reason why that should not work," Bischof told Live Science.

However, the researchers stressed that it was unlikely these findings would apply to the controversial field of cryonics, which seeks to freeze patients — or their brains — in the hope that future scientists will find a way to safely revive people. "There are huge scientific hurdles ahead of us, and it's rather premature to get into rewarming a whole person," Bischof said.

"Even if you preserved the whole body, the chances that neural pathways established during life were maintained during and after cryopreservation are probably remote," said study co-author Kelvin Brockbank, chief executive officer of Tissue Testing Technologies in North Charleston, South Carolina. "I don't think we'll see success for rewarming whole bodies within the next hundred years."

The scientists detailed their findings online March 1 in the journal Science Translational Medicine.