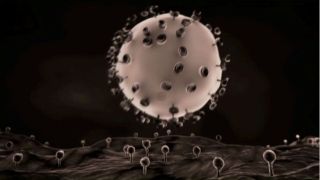 Researchers have designed nanoparticles that can deliver medicine to specific cells in the body.
(Image: © World Science Festival livestream video)

Over the last decade, a revolution in so-called nanomedicine has spurred the development of drugs intended to act like our own cellular machinery, as well as tiny robots that may help doctors diagnose and treat diseases.

One such innovation is a cancer drug that consists of particles 100 nanometers long. That means you could fit 1,000 of them across the diameter of a human hair, study researcher Dr. Omid Farokhzad, director of the laboratory of nanomedicine and biomaterials at Brigham and Women’s Hospital in Boston, said here in a panel last night at the World Science Festival.

The particles are coated with waterlike molecules that allow them to travel inside the body without being detected by the immune system, Farokhzad said. Their surfaces contain molecules that provide them with a "GPS" to seek out abnormal cancer cells.

Once they find a cancer cell, the particles stick, and like a Trojan horse, the cancer cells take them inside where they can release medicine that's toxic to the cell, Farokhzad said. [Watch the World Science Festival Live.]

In a study published last year in Science Translational Medicine, Farokhzad and colleagues showed that, in people, the nanoparticles delivered a much higher dose of medicine to cancer cells than to other cells in the body. Follow-up studies will test the effectiveness of the drug at treating tumors.

Scientists have also made nanoparticles that can sense when the body's blood sugar level is too high, and release insulin, a hormone that allows sugar to be taken in by cells. The treatment has so far been tested in mice, Farokhzad said. It is intended to be used by diabetics, who now have to monitor their blood sugar levels by periodically pricking their fingers, and inject themselves with insulin.

The idea of tiny machines inside our bodies may sound like science fiction, but in truth, our own cells contain tiny "machines" made by nature, the researchers said. Advances in technology are allowing researchers to take these natural machines to a new level.

"Nature, by evolution, has created solutions that are good enough to survive. But we can go beyond that," said Metin Sitti, a professor of the mechanical engineering and robotics institute at Carnegie Mellon University, who was also on the panel. "We are going beyond nature because we don’t have the constraints that nature has."

Sitti and colleagues created a robot the size of a fingertip that is designed to be swallowed by a person, and has a camera and an LED light for seeing inside the gastrointestinal tract. The robot is magnetic, and a doctor can control its movement with a magnet outside the body. The robot can release drugs and  biopsy small pieces of tissue to help diagnose disease.

So far, the robot has been tested in animals, Sitti said.

Safety is paramount in nanomedicine. Sitti had to change the design of his robot, which originally had "legs" for movement, because the structures caused too much tissue damage. The robot now moves by rolling, he said.

Other researchers are trying to design nanoparticles with biodegradable materials, or materials that break down into substances already found in your body, Farokhzad said.

Farokhzad pointed out that many treatments that we consider standard today, like cancer radiation, were initially criticized as being unsafe.

"All of the revolutionary changes in medicine came with an enormous amount of skepticism about the long- term consequences," he said.