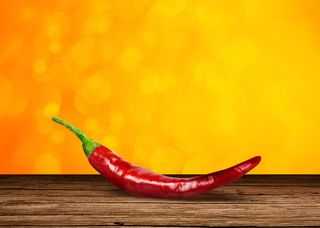 In the study, researchers found that eating these peppers was associated with a 12 percent lower risk of death, particularly from heart problems or stroke, over the 19-year study period.

However, some experts say the findings should be viewed with caution.

It's unclear "if actually eating chili peppers is what caused the results, or if simply people who eat chili peppers are more likely to engage in overall healthier lifestyle behaviors," said Keith Ayoob, a nutritionist and associate clinical professor at the Albert Einstein College of Medicine in New York City, who was not affiliated with the study. [7 Foods You Can Overdose On]

There are many reasons to include chili peppers in your diet; for example, they are full of nutrients and antioxidants. However, the study has only suggested that peppers might help you live longer; more research is needed to show exactly why people who ate red chili peppers were less likely to die over the study period, Ayoob told Live Science.

"We really can't 'overinfer' from the results," Ayoob said.

In the study, the researchers looked at data from more than 16,000 adults who participated in the National Health and Nutrition Examination Survey (NHANES) between 1988 and 1994. NHANES is a yearly survey conducted by the Centers for Disease Control and Prevention that collects information about Americans' health and eating habits. The survey included a question about whether the participants had eaten hot red chili peppers in the past month (participants were instructed not to include ground red chili pepper). All participants who indicated they had eaten any amount of hot red chili peppers in the past month were considered to be chili pepper consumers.

The researchers found that, after a median follow-up period of nearly 19 years, 22 percent of the people in the study who reported eating hot red chili peppers had died, compared with 34 percent of those who did not report eating the peppers, according to the findings published on Jan. 9 in the journal PLOS ONE.

The researchers ran a few different analyses on their data, taking into account factors such as the participants' education levels, ethnicities, diets and lifestyles. After they adjusted for these factors, the results still showed that the people who ate hot red chili peppers had a lower risk of dying during the study than those who did not consume hot red chili peppers.

An earlier study from China reported similar findings linking chili peppers to a lower risk of death, said Mustafa Chopan, a medical student at the Larner College of Medicine at the University of Vermont and the lead author of the study. The new results suggest that the association between the consumption of hot red chili peppers and lower mortality holds up in a Western population, he said.

Although the findings suggest that hot red chili peppers are a beneficial component of the diet, it's unclear why these peppers may be associated with a lower risk of death in the study participants, the researchers noted.

However, the researchers suggested several ideas for how the link could work.

One possible explanation is that a compound called capsaicin — one of the principal components of chili peppers — may play a role by binding to certain receptors, which may, in turn, help protect against obesity and lead to a lower risk of cardiovascular diseases, according to the study.

Capsaicin also has anti-microbial properties that could alter the bacteria in the gut, protecting against obesity and cardiovascular disease, the researchers noted. Finally, hot red chili peppers contain numerous other nutrients, such as B vitamins, vitamin C and a compound that the body converts into vitamin A, all of which may contribute to the beneficial effects, according to the study.

Chopan noted that the study does not prove that eating hot red chili peppers makes you live longer. To prove a cause-and-effect relationship, researchers would need to conduct a study that placed subjects randomly into one of two groups: a group receiving hot red chili peppers to eat, and a group receiving a placebo to eat. Researchers could then track whether the two groups showed a significant difference in health or mortality. [The Odds of Dying from Shark Attacks, Tsunamis & Dozens of Other Causes]