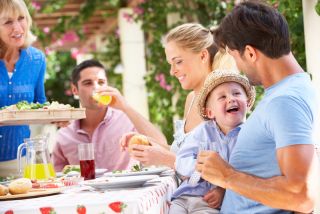 SEATTLE — Friends may warm the heart, but they won't help you live longer, new research shows. Rather, older adults are more likely to enjoy a few extra golden years if they're close with family members, sociologists have found.

"We found that older individuals who had more family in their network, as well as older people who were closer with their family, were less likely to die" during the study period, lead study author James Iveniuk, a post-doctoral researcher at the University of Toronto's Dalla Lana School of Public Health, said in a statement. "No such associations were observed for number of or closeness to friends."

The study, which has yet to be published, used survey data from nearly 3,000 older adults who answered questions in 2005 and 2006, when they were between ages 57 and 85. Scientists then looked to see who had died in 2010 and 2011. [7 Ways Friendships Are Great for Your Health]

During the initial survey, individuals listed up to five of their closest companions, described the nature of the relationship and rated how close they felt to each person. Excluding spouses, people listed an average of 2.91 confidants, and most respondents said that they had high levels of support from their network. In addition, most people were married, in good physical health and said that they weren't that lonely.

However, those people who wrote that they felt "extremely close" to a nonspousal family member had about a 6 percent chance of dying in the next five years, whereas people who said that they were "not very close" to family members had about a 14 percent risk of mortality during that same time period, the researchers found. (The same link wasn't found for number or closeness of friends.)

Closeness to family also protected individuals against an early death from cardiovascular disease, but not from cancer, the researchers found.

"Because you can choose your friends, you might, therefore, expect that relationships with friends would be more important for mortality, since you might be better able to customize your friend network to meet your specific needs," Iveniuk said. "But that account isn't supported by the data — it is the people who in some sense you cannot choose, and who also have little choice about choosing you, who seem to provide the greatest benefit to longevity."

Family members can be stressful or burdensome, but they may still provide support — and possibly more helpful kinds of support — even in challenging circumstances, than friends can, the researchers wrote in the study.

"Going back to the very first sociological theorists, many different thinkers have noted that there is some kind of special significance that people attribute to family ties, leading people to stay close to and support people who wouldn't necessarily be individuals that they would associate with if they had the choice," Iveniuk said.

The sociologists also found four other social factors linked with a longer life: being married, larger network size of both family and friends, greater participation in social organizations and feeling closer to one's companions.

Marriage had the most positive effect on longevity, even if the marriage wasn't of good quality. [6 Scientific Tips for a Successful Marriage]