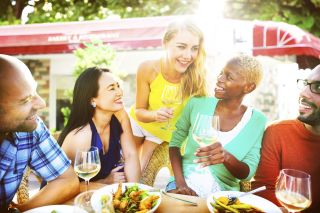 Having more friends really may make you feel better, or at least feel less pain, a new study from England suggests.

People in the study who had larger social networks appeared to have a higher tolerance for pain, according to the findings, which were published today (April 28) in the journal Scientific Reports.

In the study, the researchers wanted to see if people with larger social networks had higher levels of chemicals in the brain called endorphins. Endorphins are linked to feelings of pleasure, as well as reduced feelings of pain. (Endorphins are, in fact, a more powerful pain reliever than morphine, according to the study.) [7 Ways Friendships Are Great for Your Health]

In previous studies in both animals and humans, endorphin levels have also been linked to social bonding, Katerina Johnson, a doctoral student in experimental psychology at the University of Oxford and the lead author of the study, said in a statement.

The goal of the new study was to test the idea that social interactions trigger positive emotions because the interactions cause endorphins to bind to certain receptors in the brain, Johnson said.

There were 101 young adults in the study. To begin, the participants filled out a questionnaire about their social lives and also answered several questions about their lifestyle and personality. Then, to measure their pain tolerance, the researchers asked the participants to do a wall-sit test for as long as they could endure it, according to the study. (The wall-sit test involved squatting against a wall with the knees at a 90-degree angle and the back straight.)

The researchers found that the participants who could endure the wall-sit test for a longer period of time also tended to have larger social networks, according to the study. They noted that the participant's physical fitness level did not appear to affect the results of the test. [5 Painful Facts You Need to Know]

The researchers also found that people who were generally fitter tended to report having smaller social circles. This could be explained by timing — people who work out more often have less time to socialize, Johnson said. However, another explanation may be that because both exercise and social interactions promote the release of endorphins in the brain, "perhaps some people use exercise as an alternative means to get their 'endorphin rush,' rather than socializing," she said.

The people in the study who reported higher levels of stress also tended to have smaller social circles, according to the study.

The researchers noted that the study did not prove a cause-and-effect link between pain tolerance and social network size, and more research is needed to understand exactly how the size of a person's social network affects the individual's endorphin levels.

Understanding these mechanisms is important, Johnson said. "As a species, we've evolved to thrive in a rich social environment, but in this digital era, deficiencies in our social interactions may be one of the overlooked factors contributing to the declining health of our modern society," she said.