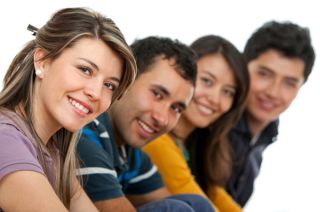 There's hardly a standard pathway into adulthood anymore in the United States, but overall the transition has gotten longer. More and more emerging adults are receiving financial support from their parents well beyond their 18th birthdays as they invest in higher education, work low-paying jobs or try to improve their living standards.

But does existing in a semi-dependent economic state drag on young adults' well-being and their bond with their parents? To find out, Monica Fitzpatrick Johnson, a researcher at Washington State University, looked to the National Longitudinal Study of Adolescent Health (Add Health), a long-term survey that has been following thousands of young Americans since 1994.

When Add Health participants were surveyed in 2001, they were between 18 and 28 years old, and 75 percent of them reported received financial assistance from their parents in the previous year. Many of them received $1,000 or more.

Johnson found that across all age groups, help from mom and dad's bank account was associated with a sturdy parent-child bond that got stronger as the amount and frequency of assistance increased.

This support did not undermine a child's self-esteem, Johnson found, but symptoms of depression increased in the 24-31 age group who received support from their parents. This was especially true for children who had already taken on more adult roles, such as those who had been holding down a full-time job or had moved in with a partner. Young people may still cling to traditional ideas about what it means to be a full-fledged adult — and financial help from parents may violate those expectations, the findings suggest.

Interestingly, Johnson found that students who received support from their mothers and fathers were immune to the worsening of depressive symptoms. That's likely because financial help for students is widely seen as socially acceptable among both young people and parents.

Compared with the benefits of financial help, Johnson believes there are low levels of risk associated with parental support for children.

"It shouldn't be too surprising that as the world changes, the way we parent and invest in our children's futures changes too," Johnson said in a statement. "I am less concerned about a small risk of undermining the well-being of those young adults who do get financial support than I am about the futures of those young adults who do not get support, either from family or social institutions."

The research was detailed in the Journal of Marriage and Family.