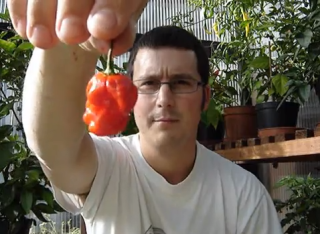 Stand aside, Bhut Jolokia: You're old hat. A recent study crowned the Trinidad Moruga Scorpion the new world's hottest chili pepper, with some specimens of this piquant plant registering more than 2 million Scoville heat units (SHU). That means each little bundle of joy packs the heat of roughly 400 jalapeños.

If that's difficult to envision, get this: Trinidad Moruga Scorpion peppers contain about as much capsaicin — the chemical compound in peppers that makes them burn by activating heat receptors in human nerve endings — as a shot glass full of law enforcement-grade pepper spray. Yummy! So, what does it feel like to eat one?

Life's Little Mysteries asked Paul Bosland, professor of horticulture at New Mexico State University and director of the Chile Pepper Institute. Bosland and colleagues recently identified the Trinidad Moruga Scorpion as hottest of all the varieties of Capsicum chinense peppers — the species that also includes the previous world record holder for hotness, Bhut Jolokia, as well as the closely related Trinidad Scorpion pepper.

Based on his descriptions, it's unclear which would be worse: Popping a Trinidad Moruga Scorpion pepper in your mouth, or popping an actual scorpion in your mouth.

When you eat a reasonably spicy pepper, your mouth goes numb, Bosland said. That's a pain response. "What's happening is that your receptors in your mouth are sending a signal to your brain that there's pain, and it's in the form of hotness or heat, and so your brain produces endorphins to block that pain," he explained.

When you eat an unreasonably spicy Trinidad Moruga Scorpion pepper, on the other hand, numbness doesn't cut it. Your body steps up its defense mechanisms by instantaneously inflating liquid-filled balloons of sorts inside your oral cavity. "You would typically get blistering in your mouth and your throat as you were swallowing," Bosland said. By putting these high-heat-capacity cushions (blisters) under the top layer of your skin, your body is attempting to absorb heat entering through that layer. "The body is sensing a burn, and it's sacrificing the top layer of cells to say, 'OK, they're going to die now to prevent letting the heat get farther into the body.'"

But in the case of Trinidad Moruga Scorpions, even blisters don't stop the burn. These peppers contain so much capsaicin that the chemical permeates the blisters and keeps activating receptors in the nerve endings underneath, causing ferocious burning sensations for 20 minutes or more, Bosland said. [Tip of the Tongue: The 7 (Other) Flavors We Can Taste]

What behavioral effect would this drawn-out torture have? As several YouTube videos attest, it makes even the most seasoned chili aficionados beg for their mommies. Pepper tasters end up vomiting, washing their mouths out with cheese whiz and shoving cheesecake up their noses. (Dairy products contain casein, a protein that surrounds and neutralizes the capsaicin compounds in chili peppers.)

But a day or so after eating one of these super hot peppers, your mouth would return to normal, Bosland said. How much Trinidad Moruga Scorpion pepper would you have to eat to actually die? Based on a 1980 study that calculated the lethal dosage of capsaicin, Bosland estimates that 2.7 pounds (1.2 kilograms) of the peppers would cause enough stomach and intestinal tissue inflammation to kill a 150-pound (68-kg) person.

Of course, peppers don't kill people, people kill people. Capsaicin only inflames human cells because heat-detecting proteins in our nerve endings called TRPV1 receptors become activated in the chemical's presence, mistakenly interpreting capsaicin as a sign of extreme heat, and sending the body's burn defenses into overdrive. As proof that it's our own fault chili peppers hurt so much, Bosland said he knows three people in the world who completely lack TRPV1 receptors, "and they don't taste chili heat at all."