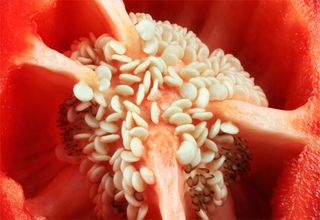 Most of the capsaicinoids (compounds that give peppers their spiciness) are hidden inside the pepper's white flesh.
(Image: © stock.xchng)

In tests that yield Scoville heat units (SHUs), the Bhut Jolokia reached 1 million SHUs, almost double the SHUs of former hotshot Red Savina (a type of habanero pepper), which measured a mere 577,000. The result was announced today by the American Society for Horticultural Science.

Chili is spelled "chile" by some, including Paul Bosland, director of the Chile Pepper Institute at New Mexico State’s Department of Plant and Environmental Sciences. Bosland collected seeds of Bhut Jolokia while visiting India in 2001. He grew the plants for three years to produce enough seeds to complete the field tests.

"The name Bhut Jolokia translates as 'ghost chile,'" Bosland explained. "I think it’s because the chile is so hot, you give up the ghost when you eat it!"

The intense heat concentration of Bhut Jolokia could have a significant impact on the food industry as an economical seasoning in packaged foods, he said.