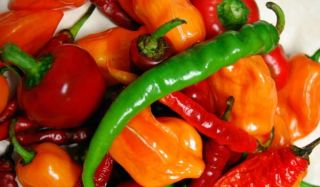 Chili peppers are the fruits of Capsicum plants, which produce a chemical called capsaicin to fend off hungry mammals.
(Image: © Birdflewby | Dreamstime)

Uh-oh. Judging from your reaction, that chunk of Indian food you just bit into wasn't some harmless vegetable , but a bhut jolokia, the world's hottest chili pepper, according to Guinness World Records.

Eyes watering? Mouth on fire? Nose gushing? Don't worry. There are ways to lessen, maybe even avoid, the next six to eight hours of relative agony, but first maybe you'd like to know why spicy food causes your nose to flood like the Brahmaputra River during monsoon season.

The distinctive spiciness of chili peppers derives from the chemical capsaicin, which causes a burning sensation when in contact with bodily tissues.

What causes the burn

Capsicum plants produce capsaicin in their fruits, which are chili peppers, to fend off hungry mammals. Its irritant qualities are so pronounced that pepper sprays made from it are more debilitating than tear gas, according to the European Parliament's Scientific and Technological Options Assessment report.

However, capsaicin is only the best-known of the spicy food irritants. Another, allyl isothiocyanate, is an oil that lends its kick to radishes, horseradish, wasabi and mustard. Manufacturers also use it as an ingredient in insecticides and fungicides.

What does all of this have to do with your runny nose? Capsaicin and allyl isothiocyanate irritate mucous membranes the linings protecting your lungs and various body openings and cavities from infectious agents such as fungi, bacteria and viruses.

Mucous membranes in your nose produce nasal mucus , better known to children everywhere as snot, which traps allergens, airborne dust and other undesirables, keeping them out of your respiratory system. The more irritated your nasal membranes become, the more mucus they produce as a defense.

If you're in over your head and looking for the best way to beat the heat, skip water and beer and reach for milk instead. Capsaicin has an oily quality that keeps it from dissolving in water, so even guzzling straight from the tap will do you no good, and beer contains too little alcohol to have more effect than water.

Milk, on the other hand, quenches capsaicin's fire quite effectively, according to research published in the journal Physiology & Behavior. It contains a protein called casein, which is a lipophilic ("fat-loving") molecule that hugs the capsaicin molecules and washes them away, much like detergents wash away grease.

According to that same research, a chemical reaction with sucrose (table sugar ) can also smother capsaicin's sizzle, so if there's no milk handy, try a 10 percent solution of sugar in a cold glass of water.