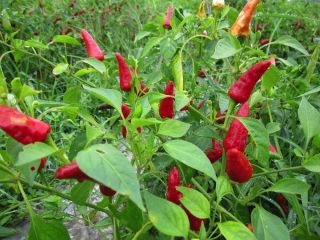 The Zunla-1 pepper growing in the fields.
(Image: © Cheng Qin)

Scientists have sequenced the genome of the pepper plant, revealing the genes responsible for pepper's spiciness.

The new genome, detailed today (March 3) in the journal Proceedings of the National Academy of Sciences, could pave the way for even more mouth-numbingly hot peppers.

Peppers were first domesticated by Native Americans in the tropics of South America as far back as 8,000 years ago, from a wild variant known as Chiltepin annuum (variant glabriusculum). The pepper, which is part of a family that includes the tomato and the potato, soon spread from the New World after Columbus arrived in the Americas.

After hundreds of years of breeding, chili peppers now come in a dizzying array of colors and flavors, from the bland Anaheim pepper to the scorching Scotch bonnet, and more than 34.6 million tons of the peppers were harvested in 2011. [Tip of the Tongue: The 7 (Other) Flavors We Can Taste]

In recent years, hot pepper aficionados have used old-fashioned breeding to amp up the heat-producing compound, called capsaicin, to make ever more insanely hot peppers. Some of the resulting peppers, including the Carolina Reaper and the Trinidad Moruga Scorpion, can be 100,000 times as spicy as the humble pimento pepper, and researchers have calculated that 2.7 pounds of the spice from these peppers would be enough to kill a human. (For comparison, a Trinidad Moruga Scorpion contains about the same amount of capsaicin as a shot-glass of law enforcement-grade pepper spray.)

To learn more about the pepper, Qin and his colleagues sequenced the genome of a pepper cultivated at their institution, known as Zunla-1, along with its wild counterpart.

The team found that the pepper diverged from tomatoes and potatoes about 36 million years ago. In addition, about 81 percent of the plant's genome was made up of transposons, or so-called jumping genes that can move to other places within the genome. These genes were inserted about 300,000 years ago.

In addition, the team scanned the genomes of 18 cultivated peppers to compare differences between wild and cultivated varieties. The team found several genes associated with how long the seeds stay dormant, resistance to pests and longer shelf life.

The team also identified the genetic component behind spiciness. It turns out that a key gene can be duplicated a different number of times to provide more or less capsaicin. Bland varieties, by contrast, have a deletion of the heat-producing gene, the researchers found.

The findings suggest two new ways to breed even spicier peppers, either by identifying peppers with the right spice genes and cross-breeding them, or by genetically engineering the peppers to express more copies of the heat-producing genes, Qin said.

Editor's Note: This article was corrected to note that new research was published in the Proceedings of the National Academy of Sciences.