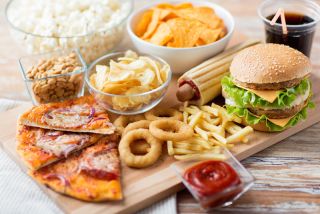 However, experts emphasize that most Americans are exposed to phthalates every day, and it's not clear exactly how much of this exposure comes from fast food.

Still, for people who want to reduce their exposure to phthalates, a chemical used in plastics that can leach into foods, reducing fast food consumption could be one way to do this, said Dr. Kenneth Spaeth, chief of occupational and environmental medicine at Northwell Health, a health care network headquartered in Great Neck, New York.

"I think there are very pressing health reasons to avoid fast food to begin with," including its ties to obesity, said Spaeth, who was not involved in the new study on phthalates. "Now, with this kind of information about phthalates [linked to fast food], that certainly becomes an additional reason" to avoid these foods, Spaeth said. [12 Worst Hormone-Disrupting Chemicals & Their Health Effects]

In the study, public health researchers at The George Washington University in Washington, D.C., analyzed information from more than 8,800 people who took part in a national health survey and answered questions about their diet, including how much fast food they'd eaten in the past day. The survey participants also submitted urine samples, which the researchers analyzed to look for the breakdown products of two types of phthalates.

The findings are concerning, Spaeth said, because exposure to phthalates has been linked with adverse health effects, including reproductive problems in adults, and lower IQ in children. Although previous studies have shown that phthalates come from many sources, and that 98 percent of Americans have detectable levels of the chemicals, the new study suggests that fast food could be a "meaningful source" of phthalates, Spaeth said.

The findings are also impactful because they implicate a popular food category as a potential source of people's phthalate exposure. "You clearly see that the sources of exposure are not subtle," Spaeth said.

The study also suggested that meat and grain items — including bread, cake, pizza, burritos, rice dishes and noodles — were the biggest contributors to phthalate exposure in the people who ate fast food.

Phthalates might get into fast food if the food comes into contact with plastic packing or PVC tubing (used in food processing) that contains the chemical. It's also possible that the plastic gloves that fast food workers wear may be a source of phthalates, the researchers said.

It's hard for people to avoid exposure to phthalates altogether, Spaeth said, because the chemicals are found in a lot of consumer products, including cosmetics and personal care products, and other processed foods.

It's important to note that the study found only an association between fast food consumption and exposure to phthalates in people, and does not prove that the phthalates actually came from fast food. Future studies are needed that take into account other sources of phthalates, including other processed foods, to better understand the role of fast food in phthalate exposure, Spaeth said.

The study was published April 13 in the journal Environmental Health Perspectives.