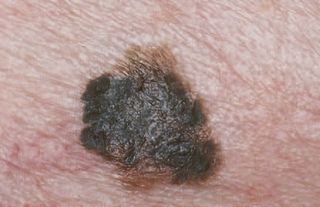 Checking out the moles on your skin is a common way to look for the deadly skin cancer melanoma, but a new study shows that many people with melanoma may have few moles.

In the study, researchers looked at about 560 people with melanoma and found that 66 percent of them had 20 or fewer moles.

The new results show that all people, including those who have few moles, "should be paying attention to their moles, should be looking at their skin really carefully and should be asking their doctors for regular skin checks," said study author Alan C. Geller, a senior lecturer at the Harvard T.H. Chan School of Public Health in Boston.

Among patients younger than 60, those who had more than 50 moles tended to have melanoma tumors that were thinner (less than 2 millimeters thick, or about 0.08 of an inch), compared with those who had fewer than 50 moles. The thickness of the melanoma indicates how deeply the cancer has gone into the skin, and so this finding shows that the people with a lot of moles did not necessarily have the most severe cases of melanoma.

However, the researchers also found that the way a mole looks remains important. The people who had five or more moles that looked different from ordinary, non-melanoma moles had a higher risk of thicker melanoma (more than 2 mm thick), compared with those who had no such moles, the researchers found.

Previous studies have linked having a greater number of moles to an increased risk of melanoma, the researchers said. The new study serves as a reminder that even people who don't have many moles or other known risk factors for melanoma may still get the skin cancer, the researchers said.

This is because the various risk factors for melanoma "each have their problems," Geller said.

The bottom line is that people should look at their skin, and should start looking for any changes in their moles, Geller said. People who begin to see any changes in a mole, "should watch it and make sure their doctor — their primary- care physician or dermatologist — takes a good look at it," he added.

Geller recommended that people watch out for any of the following changes in moles, which dermatologists use the abbreviation "ABCD" to remember: asymmetry (one side of the mole starts to look different than the other side), border (the border around the mole begins to change), color (the color of the mole changes, for example becomes darker) and diameter (the mole becomes wider than the diameter of a pencil head eraser).

The National Cancer Institute estimates that about 74,000 people in the U.S. will be diagnosed with melanoma in 2016, and about 10,000 people will die of the disease this year.

The new study was published today (March 2) in the journal JAMA Dermatology.