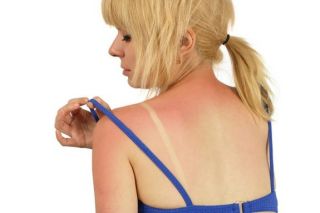 The risk of developing the deadliest form of skin cancer, melanoma, may be more closely related to sun exposure in early life than in adulthood, researchers say.
(Image: © Ron Sumners | Dreamstime)

Although too much sun exposure throughout life increases the risk of all types of skin cancer, melanoma — the least common, but deadliest type of skin cancer — seems particularly linked to sun exposure early in life, according to a new study.

The researchers found that women who had experienced five or more blistering sunburns before age 20 had an 80 percent higher risk of developing melanoma compared with women without sunburns at a young age.

In the 20-year study, the researchers looked at 109,000 Caucasian women ages 25 to 42 who resided in 14 different U.S. states, to examine the role of a number of risk factors, including chronic sun exposure in adulthood and sun exposure in early life, in developing the three major types of skin cancer. The study participants regularly provided information about their health and skin cancer risk factors, including the number of moles on their legs, the number of blistering sunburns they had experienced and their use of tanning beds.

Because people may not accurately remember and report their sun exposure-related behaviors, the researchers also estimated each participant's cumulative exposure to the sun's ultraviolet (UV) radiation over the study period based on how long each person lived at different locations in the United States, as the angle of the sun changes by latitude. [7 Common Summer Health Concerns]

The results showed that the women who were estimated to be exposed to the highest amounts of UV radiation during the study period when they were adults, had a more than two-fold increase in their risk of developing basal cell carcinoma and squamous cell carcinoma, compared with women who had the lowest UV exposure. (That sun exposure number was based on the survey answers and where the person lived.)

However, there was no such link between the amount of UV exposure in adulthood and the risk of developing melanoma. Rather, melanoma risk was more closely related to sun exposure in early life, as judged by the number of severe, blistering sunburns in youth years, the researchers found.

"Pattern of sun exposure was not uniformly associated with the risk for all the three main skin cancers we see in the United States, suggesting that there are some differences in the pathophysiology of these skin cancers," said study researcher Dr. Abrar Qureshi, chief of the department of dermatology at Rhode Island Hospital in Providence.

In line with previous studies, the researchers also found that women with red hair color, and those who reported their skin was sensitive to sun exposure when they were children, were more likely to develop a skin cancer of any type. Family history of melanoma and number of moles on the legs were also strongly linked to risk of developing melanoma.

The researchers detailed their findings today (May 29) in the journal Cancer Epidemiology, Biomarkers & Prevention.