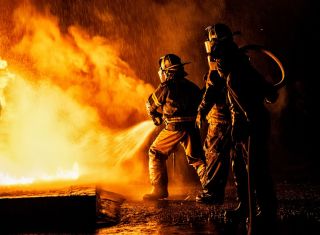 Firefighters may have a higher risk of skin cancer than the general public, a new study finds.

The study analyzed information from about 2,400 firefighters in South Florida. Participants answered questions about whether they had past skin-cancer diagnoses, as well as what kind of sun protection (including sunscreen) they used and whether they had been screened for skin cancer or had other skin cancer risk factors (such as sunburns).

Overall, 109 firefighters (4.5 percent) reported having a diagnosis of skin cancer at some point, including 17, or 0.7 percent, who were diagnosed with melanoma. That's higher than the rate of melanoma among Florida adults in the general population, which is only 0.01 percent, the researchers said. (Melanoma is the deadliest form of skin cancer.)

"It is certainly possible that chemicals encountered by firefighters during the incident response could be increasing their risk for skin cancer," said study co-author Dr. Alberto Caban-Martinez, an assistant professor in the Department of Public Health Sciences at the University of Miami's Miller School of Medicine. [You and the Sun: 10 Burning Questions]

For example, soot produced by the combustion of materials can contain harmful chemical compounds that may increase the risk of cancer, Caban-Martinez told Live Science in an email. "This soot can transfer from the fire to their fire engine/truck, back to their fire station and possibly even home."

Another group of chemicals produced by combustion is called the polycyclic aromatic hydrocarbons, which are known cancer-causing chemicals. One study found that these chemicals can enter people's skin through specific receptors, Caban-Martinez said.

But other factors, such as exposure to sunlight outside of work hours, could also play a role in firefighters' increased risk of skin cancer. Or there may be a synergist effect between exposure to ultraviolet rays from sunlight and chemicals from fighting fires, Caban-Martinez said. For this reason, more research is needed to better understand skin cancer risk among firefighters and to identify possible work-related hazards that may increase the risk, the researchers said in the study.

This isn't the first study to uncover a link between firefighting and cancer risks: Other studies have found that firefighters have an increased risk of a number of cancers, including those of the digestive, oral, respiratory and urinary systems, according to the Centers for Disease Control and Prevention.

The researchers in the recent study also looked at other skin cancer risk factors among firefighters.

Only 14 percent of firefighters in the study, and 12 percent of those with a history of skin cancer, reported wearing long pants outdoors (which can protect against sun exposure). About 1 in 4 (24 percent) of firefighters said they had used a tanning bed at some point in their lives. That's lower than the average prevalence of tanning bed use among adults in Western countries, which is around 36 percent, the study said. (Use of tanning beds is linked with an increased risk of skin cancer.)

Overall, about 50 percent of firefighters said they had undergone a full-body check for skin cancer. That's higher than the rate of skin cancer screening among the general population of Florida adults, which is 11 percent.

The new study suggests that doctors who care for firefighters should consider conducting full-body skin checks during regular physicals, Caban-Martinez said. Doctors should also educate patients about what they can do to protect themselves from UV light (such as wearing sunscreen or protective clothing) while working outdoors for extended periods, he said.

The study was published today (Dec. 13) in the journal JAMA Dermatology.