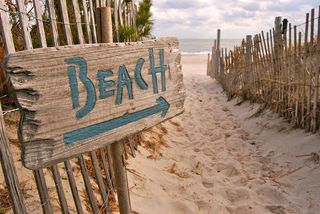 Summer's almost here, and so are microbes and other environmental woes that can bring your sun and surf fun into a halt.

Among the infections that tend to come when the temperatures rise, some are mild while others can be deadly.  From poisonous plants to "brain-eating" amoebas, here are ten health hazards you should be aware of this summer:

Valley fever, also called coccidioidomycosis, is an infection by a fungus that lives in soil. People become infected by breathing in the spores of the fungi from the air.

This fungus is thought to grow best in soil after heavy rainfall, and then to disperse into the air during hot, dry conditions. Researchers have found an increase in the number of infection during hot and dry weather conditions, for example during drought, according to the Centers for Disease Control and Prevention (CDC).

In the U.S., these fungi are found in Western states including California and Arizona, but have also been recently found in south-central Washington.

It is difficult to prevent breathing in fungal spores, but people who live in or travel to areas where the fungi are common, can try to avoid spending time in dusty places as much as possible. Most people who become infected experience flu-like symptoms, and get better on their own within two to three months, but some need antifungal medication, according to the CDC.

West Nile virus lives in birds and mosquitoes, and is transmitted to people by mosquito bites. In the United States, infections tend to rise starting June, and the number of cases peaks in the middle of August, according to the CDC.

You can reduce the risk of getting infected with West Nile virus by using insect repellent and wearing protective clothing, such as long sleeves and pants, to prevent mosquito bites.

The Naegleria fowleri is a heat-loving microscopic amoeba living in warm freshwater, for example lakes, rivers, and hot springs. It can also be found in soil. Most cases of infection with this amoeba have occurred during the summer months.

People usually get infected by swimming in warm, fresh water. Water containing the parasite can enter the body through the nose, and then travel to the brain and cause deadly inflammation of the brain and the membrane that surrounds it.

Infections with Naegleria fowleri are rare – in the 10 years from 2003 to 2012, 31 infections were reported in the United States, according to the CDC. But most people who become infected don't survive.

Deer ticks that carry the Lyme disease bacteria are most active during the spring, early summer and fall. They ticks favor shady, humid environments, and can be found clinging to grass, in lawns and gardens, at the edges of woods, and in old stone walls, according to New York's Department of Health.

To protect yourself from tick bites and Lyme disease, avoid walking in places where ticks are likely to live, and use insect repellents and skin covering clothing.

Some 80 to 90 percent of people are allergic to an oil in the sap of plants such as poison ivy, poison sumac and poison oak, according to the American Academy of Dermatology.

People are more likely to come into contact with these plants in summertime when they are more common. The allergic reaction causes a painful and itching rash, which can often be treated with over-the-counter topical lotions and antihistamines. Learning about how these plants look like can help avoiding contact.

Swimmer's ear, also called otitis externa, is a common infection of the outer ear canal that results in about 2.4 million doctor's visits and $500 million in health care costs each year, according to the CDC.

To prevent getting an ear infection from organisms living in the water, use a bathing cap or ear plug when swimming, and dry your ears well with a towel after swimming. Leave your ear wax alone, though, because it helps protect your ear canal from infection.

Extreme heat kills about 650 Americans yearly, and sends many more to emergency rooms, according to the CDC. To put things into perspective, between 1979 and 2003 more people have died from extreme heat than from tornadoes, hurricanes, floods and earthquakes combined.

Extreme heat causes hyperthermia, a condition in which a person's body absorbs more heat than it dissipates. Hyperthermia can lead to dangerously high body temperatures that require medical attention.

To stay safe, the CDC recommends using air conditioning during hot summer days, keeping hydrated, and checking at least twice a day on the elderly and those who have other medical conditions that put them at higher risk for heat-related problems. Also, never leave children, or pets, in a parked car.

Hand, foot, and mouth disease is a viral infection that usually affects children younger than 5 years old, but can occur in adults too. Patients experience fever, mouth sores, and a skin rash, according to the CDC.

There's no vaccine to protect against the viruses that cause hand, foot, and mouth disease, but maintaining personal hygiene such as washing hands and disinfecting common surfaces or toys can lower the risk of infection.

Another thing to be wary of during the summer is dehydration, which doctors say contributes to a peak in number of people developing kidney stones.

As you sweat, the body loses water and makes less urine, which allows for stone-causing minerals to form stones in the kidneys and urinary tract.

This virus, carried by rodents, can cause a rare but deadly disease called hantavirus pulmonary syndrome. During summer months when people spend more time outdoors, they are more likely to come in contact with droppings of infected rodents, and become infected. Also, when fresh rodent urine or droppings are stirred up, tiny droplets containing the virus get into the air and can infect people through inhalation.

To avoid contact with the virus, people are advised to keep their homes and workplace rodent-free and be cautious of mouse activity in campsites, parks and cabins where they plan to spend time.