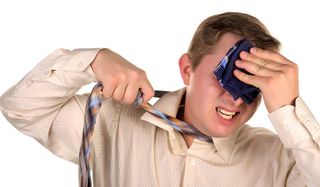 Hyperthermia is an abnormally high body temperature caused by a failure of the body's normal heat-regulating mechanisms, according to the National Institutes of Health. When the heat coming from the environment exceeds the body's ability to dissipate that heat, hyperthermia results.

The temperature outside , along with a person's general health and lifestyle, can affect their chances of developing hyperthermia.

Older people may be more vulnerable to hyperthermia than younger people, according to the National Institute on Aging. Particularly, those with chronic medical conditions, those who live in housing without air conditioning and those who lack mobility and access to transportation are at risk.

To avoid hyperthermia, the NIH advises staying indoors on hot and humid days, especially when an air pollution alert is in effect, and drinking plenty of fluids. For people without air conditioning, the NIH recommends going to cool public places , such as libraries, shopping malls or public cooling centers.

Heat fatigue, heat syncope (an episode of sudden dizziness after prolonged exposure to the heat), heat cramps, heat exhaustion and heat stroke are all commonly known forms of hyperthermia.

Heat stroke is a life-threatening form of hyperthermia, and occurs when the body is overwhelmed by heat. Someone with a body temperature above 104 degrees Fahrenheit (40 degrees Celsius) is likely suffering from heat stroke, according to the NIH. They may have symptoms of confusion, combativeness, a strong, rapid pulse,a lack of sweating, faintness and possible delirium or coma.

Emergency medical attention should be sought for anyone who shows these symptoms, especially an older adult.