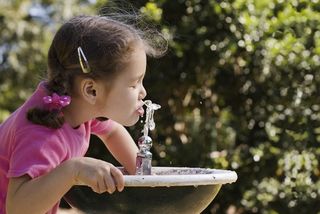 Possibly the best way to prevent kidney stones is to drink water, lots of it.
(Image: © Stephen Denness, Shutterstock)

Ah, summer. The sun, the sand … and kidney stones.

August is peak season for developing kidney stones. Doctors have seen a sharp increase in patients with stones in general — a rise by as much as 30 percent in the past decade — likely tied to diets high in refined sugars, salt and animal protein. (More on this below.)

But the primary reason for the summertime kidney blues is dehydration. As the mercury rises, we sweat more. Without proper hydration, the body's fluids become more concentrated with dietary minerals, such as calcium. This increases the risk that the minerals will concentrate into stones.

More than 10 percent of Americans will develop at least one kidney stone during their lifetime. Many get their first stones as early as their mid-20s.

Some people who have had stones might tell you it can be more painful than childbirth, as these often-jagged crystals slowly make their way through your delicate and narrow urinary track. Forming a stone just once increases your risk of forming another by at least 50 percent.

So, this is something worth preventing. And the easiest way, particularly in the summer, is to drink plenty of fluids. [5 Wacky Things That Are Good For Your Health]

The ins and outs

William Haley, a nephrologist at Mayo Clinic's Kidney Stone Clinic in Jacksonville, Fla., recommends drinking two liters, or about eight cups, of non-caffeinated liquid per day. Water is best. But output is more important than input, Haley said. You should shoot for producing a whopping 2.5 liters of urine daily.

"If you don't void [urinate] every couple of hours, you're not drinking enough," Haley told LiveScience. Fear not if you'd rather not measure your output in a cup. A very full bladder holds about half a liter of urine. Haley said the general rule of thumb is to drink until there's little yellow in your urine.

What to drink is a stickier issue. John Milner, a urologist at Loyola University Chicago Stritch School of Medicine, has said that iced tea can promote the formation of the most common type of kidney stone, the calcium oxalate stone. Tea, particularly black tea used for iced tea, is high in oxalates.

The "most common type" he refers to is the calcium oxalate stone. Tea, particularly black tea used for iced tea, is high in oxalates. While there is no proof of a connection, anecdotal evidence suggests that drinking glass upon glass of iced tea on hot days is what helps make the American South the so-called kidney stone belt.

No scientific studies support this connection, however. At best, this is advice for chronic stone formers; anecdotal evidence does suggest that drinking glass upon glass of iced tea on hot days is what helps make the American South the so-called kidney stone belt.

Milner also recommends lemonade because the citric acid in lemons inhibits urinary crystal formation. But lemonade comes with baggage — lots and lots of sugar. Hence, back to Haley's advice that water is best. You can add a lemon wedge. Many foods contain water, too.

The reasons for the nationwide increase in kidney stones are complicated and, for the most part, not well understood. But a diet high in refined sugars, salt and animal protein — that is, the typical American diet — does seem to be a factor.

The meat-heavy Atkins and South Beach diets, for example, have brought in many new patients with stones to the Mayo Clinic, Haley said.

And then there are those oxalate-containing foods, such as tea. The list of oxalate-containing foods include the healthiest foods on the planet: blackberries, blueberries and kiwifruit; Swiss chard, spinach and most dark, leafy greens; almonds, cashews and other nuts; tofu and other soy products; and good ol' wheat germ, a health-food store staple.

Considering that Americans likely aren't developing more kidney stones from eating these foods, advice to cut back on oxalates for the general population might be shortsighted.

Summertime and the passing's uneasy

It could be that those people forming calcium oxalate stones have a propensity to do so, Haley said. There also could be a threshold, in which a diet high in animal protein, sodium and refined sugars, coupled with oxalates and dehydration, increases the risk for stone formation, Haley added.

Both Milner and Haley recommend seeing a doctor if you think you have passed a stone. It might have been too small to feel (this time!), but it could have caused blood in the urine. Analysis of your urine could determine what minerals are being excreted and what foods you need to avoid.

Complicating the situation even further is global warming. It is getting hotter; and Haley, among others kidney specialists, doesn't rule out this factor, given the strong relationship between summer heat and kidney stones.

Which brings us back to Haley's top recommendation, regardless of your kidney stone history: "Hydration, hydration," he said.