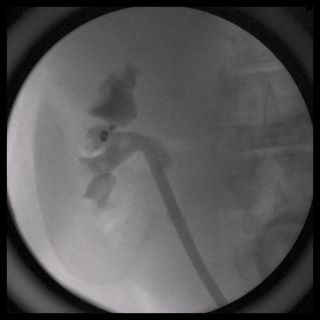 Image of a pig kidney taken using a technique called x-ray fluoroscopy. The kidney stone, which appears dark because of a contrast agent, was implanted in the kidney. Using low intensity ultrasound waves, researchers were able to move the stone form the lower left of the kidney to the upper right and then out the long descending tube.
(Image: © Wei Lu, Anup Shah, Bryan W. Cunitz, Oleg A. Sapozhnikov, Michael R. Bailey, University of Washington.)

Passing kidney stones is often described as the worst pain people have ever experienced. Even worse, about half of kidney stone sufferers will get another stone within the following five years. Worse still, it's often the initial treatment that leads to the subsequent stones.

But scientists are working on a new technique that could help prevent reoccurring kidney stones and maybe even get rid of smaller fragments before they become large and painful.

The technique involves using ultrasound waves to gently nudge stones toward the kidney exit. Testing in live pigs, whose kidneys are similar to ours, has shown success.

"It just takes a flick, just a fraction of a second, we see the stone just jump in the kidney several centimeters, and sometimes it even bounces right out the door of the kidney," Michael R. Bailey from the University of Washington in Seattle. "We have always been able to move the stones in each animal."

Kidney stones are crystallized mineral deposits that form inside the kidneys. They form when the basic elements that make up urine (water, minerals and salts) are out of balance. This can happen when there is not enough liquid to dissolve the minerals and salts, or if there is an abundance of these crystal-forming materials.

People who are dehydrated or who have certain metabolic conditions are prone to kidney stones.

The stones become problematic when they get bigger than about 2 millimeters (about 1/16th of an inch) in diameter. The buildup happens over time, but the stones become painful when they begin to travel down the ureter, a small tube that connects kidneys to the bladder.

The main method used for treating large stones (up to 10 mm in diameter) is to blast them with high-intensity ultrasound pulses, known as "extracorporeal shock wave lithotripsy." However, this method can leave small pieces of stone that then can become the foundation for future stones, Bailey said.

The technique being developed by Bailey and his colleagues gently pushes small fragments toward the kidney exit so that they pass naturally. Their device uses a relatively low-intensity ultrasound beam (similar to what a doctor might use to look at a fetus) to both view the kidney stone and move it.

Their method is not intended to replace current treatments, but rather to supplement them. Since large stones cannot pass through the ureter they first must be broken into smaller bits. The device could help remove the small fragments that remain after lithotripsy treatment; or it could move large stones close to the kidney exit so that, when they are broken up, they are in the right place to pass naturally, said Bailey.

And if stones are detected when they are quite small, the device could help them pass without the patient ever needing the lithotripsy treatment, he said.

Avoiding multiple treatments with lithotripsy would be desirable, because each procedure comes with a risk of injury, such as bleeding in the kidneys.

The scientists think the imaging aspect of their technique may even be able to compete with the current method of diagnosing kidney stones – a spiral computed tomography (CT) scan. These scans use X-rays, and thus expose patients to ionizing radiation (too much radiation is thought to be a health hazard).

"We may just be able to have a portable ultrasound device in a doctor's office," Bailey said. "You come in, he or she can quickly put it on the body, see the stone, and see the size and location of the stone, and save you that trip to the spiral CT."

The pulses from the kidney stone-pushing device are longer than those used for a regular diagnostic ultrasound. And so if the device were used on humans, doctors would need to switch it off for a longer time period between pulses to avoid a heat injury.

Bailey hopes the method will be ready to test on humans in about two years. He and his colleagues will present their work at the 158th Meeting of the Acoustical Society of America on Oct. 27 in San Antonio, Texas.