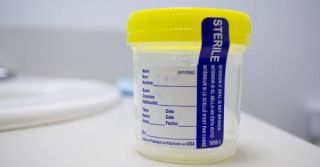 How's your pee been looking lately?

It's not exactly polite conversation, but it's a question worth asking yourself from time to time. Just as the eyes are windows into the soul, urine is a window into the body.

It can reveal whether you're dehydrated, for instance, a common health issue during these sweaty summer months. Healthy urine consists of yellow waste products that are dissolved in water. Like lemonade mixed from a powder, the less water involved, the darker yellow (and more pungent) the result, so dark yellow urine tells you you're due for a glass of water.

But to a doctor, urine can provide even more information. One way for doctors to find out what's going on inside the body is to examine what flows out of it. So don't be surprised the next time a doctor asks for a urine sample for a seemingly non-urinary complaint.

In fact, be a little proud. When you hand over that little cup, you're participating in a medical tradition more than 6,000 years in the making. [Related: The Fascinating History of Urine Tests]

Today's urinalysis can reveal a great deal about a person's heath. But even simple urine color can tell people when to seek medical attention. Urine color may change due to something as innocuous as medications or foods, or as malevolent as an infection or cancer.

Urine that appears pink or red from the presence of blood is one cause for alarm.

"If you see blood in the urine, even once, it requires you to see a doctor," said Marshall Stoller, a professor of urology at the University of California, San Francisco. "It could be nothing," he said, but "it could be an early sign of a kidney stone or a cancer of some sort."

Red urine isn't the only indication of danger. "Sometimes the urine has a sort of Coca-Cola color," Stoller said. "It could be due to old blood from a tumor or kidney stone" or a blood clot in the kidney, which is more common in people with sickle cell disease.

"Another reason that people could have that [cola] colored urine is when you have someone who's being crushed," Stoller said. Crush injuries, like those sustained during earthquakes, cause muscle to break down, and bits of crushed tissue enter the bloodstream and are filtered into urine by the kidneys.

Liver damage can also lead to brownish urine, as can porphyria, an inherited blood disorder. And eating gargantuan quantities of fava beans or rhubarb can also turn urine dark brown or black.

But not all abnormal urine colors are bad news. In fact, if you've eaten significant quantities of beets or blackberries, don't be surprised to find yourself producing red or pink urine. Certain laxatives can also turn it red.

The same goes for orange urine, if you've been taking a urinary tract painkiller containing phenazopyridine, which can make pee look like Tang. Of medicines that affect urine color, "that's the classic," Stoller said.

Methylene blue, part of some common medications for bladder discomfort, can turn urine blue or green. And an overabundance of water-soluble vitamins can make urine appear brighter yellow than normal.

An inherited condition, maple syrup urine disease, so named because it causes urine to smell like sweet maple syrup, results from the body's inability to digest certain amino acids. It's usually diagnosed in infants and treated with dietary restrictions, which must be started early in life to prevent brain damage and other problems. In many states, every newborn is tested for this disease.

Sweet-smelling urine can also indicate diabetes mellitus, because excess blood sugar finds its way into the urine. And as medieval doctors knew, sugar also affects urine's taste, but that's one diagnostic test they probably preferred to do as little as possible.

But that's not all. Asparagus is infamous for the stench it lends urine, which only some people can perceive.

"I see 100 patients a week. The odds of seeing patients with odd-colored urine is 1 percent," Stoller said. Rather, most of the clues that doctors look for in urine, he explained, are invisible, detectable only in the urinalysis lab.

"There are dipsticks out that you can dip in the urine and identify the likelihood of infection," Stoller said. Urinalysis labs can also test for miniscule amounts of sugar, blood, amino acids and other molecules, he said. They can put a number on urine's concentration, and screen for drugs. And by examining urine's tiny crystals under a microscope, doctors can diagnose certain types of kidney stones.

Dehydration is the urinary issue people are most likely to encounter, Stoller said. And dehydration, though it sounds mundane, can become very serious very quickly, especially for the urinary system. "The problem is when you concentrate the urine, things can get clogged up," he said. "When kidneys get plugged up it can result in renal failure."

Pass it on: If you're concerned about the color or smell of your urine, see a doctor.