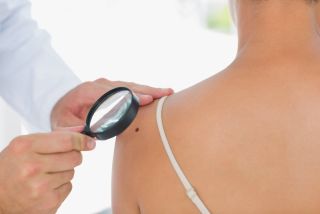 A woman's number of moles may hint at her risk of breast cancer, a new study finds.
(Image: © Woman with mole photo via Shutterstock)

People who have 11 or more moles on one of their arms could have a higher risk of the deadly skin cancer melanoma, according to a new study.

Researchers counted the number of moles that study participants had on 17 sites on the skin of their bodies — such as the left leg, the chest and the back — and found that the arms were the site that was the best indicator of the total number of moles on the whole body.

The findings suggest that the arm could be the best place to look to estimate the number of moles on the whole body. "Many different body sites were predictive of total body mole count, but at the end, the strongest one was the arm," said lead study author Simone Ribero, a research fellow at King's College London, adding that the right or left arm work as a good indicator of the total number of moles on the whole body. [5 Things You Must Know About Skin Cancer ]

There will be an estimated 74,000 new cases of melanoma in the United States in 2015, and 10,000 of those people will die of the disease this year, according to the National Cancer Institute.

The total number of moles a person has is an important marker that can help determine their risk of skin cancer, according to the researchers.

In the new study, the researchers looked at data from 3,694 female Caucasian twins who were taking part in a long-running study of twins in the United Kingdom, called the TwinsUK study. Between January 1995 and December 2003, the participants underwent a skin examination in which researchers recorded their skin type, eye color and freckles, hair color and moles.

The researchers also confirmed the link they found between total mole count and the number of moles on the right arm using data from another study, which included male and female participants.

Two other body sites — the area above the right elbow, and the legs — were also found to be particularly predictive of a person's total body mole count. In men, the number of moles on the back was a good indicator of total mole count as well, the researchers said.

A person's melanoma risk is thought to increase by 2 to 4 percent with each additional mole on the body, the researchers said. However, determining the total number of moles on the whole body can be difficult and time-consuming.

"Every dermatologist and physician in general knows that the risk of melanoma increases with the total body number of moles, but counting moles is a very long procedure," Riberosaid. "We hope that this technique will be helpful for this."

However, there are other factors that may better determine a person's risk of melanoma, said Dr. Hooman Khorasani, chief of dermatologic and cosmetic surgery at Mount Sinai Hospital in New York, who was not involved in the study.

"Genetic composition is way more important, as well as how the moles look," Khorasani said. For example, moles that doctors call "dysplastic nevi," which are unusual, benign moles butthat resemble moles that indicate the presence of melanoma are essential to distinguish from other moles because they signal an increased cancer risk.

According to the American Cancer Society, people with greater exposure to ultraviolet (UV) light, and those with fair skin, freckles, light hair or a family history of melanoma face an increased risk of melanoma.

"It's more important that you look at a person's risk factors than count the number of moles on their arm," Khorasani said.

The study was published Monday (Oct. 19) in the British Journal of Dermatology.