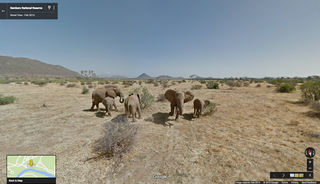 You don't have to leave home to hang out with one of the world's most beloved tusked mammals. Thanks to Google, it's now possible to frolic with elephants in your living room (or anywhere else your Internet-connected device happens to be).

Save the Elephants, a research and conservation organization operating in Samburu National Reserve in Kenya, recently teamed up with Google to help share the story of Africa's imperiled elephants.

Using truck- and airplane-mounted cameras inside the wildlife preserve, as well as photos taken by satellites in space, Google captured images of Samburu's elephant herds doing elephant things — like splashing in the mud and hanging out in the shade. The imagery is now available online via Google Street View, the feature that gives Google Maps users an on-the-ground perspective of certain places on Earth. [7 Amazing Places to Visit with Google Street View]

More than 1,000 elephants call northern Kenya's Samburu National Reserve home, and that number is slowly increasing year after year, said David Daballen, head of field operations at Save the Elephants' Samburu Camp. In a recent blog post about the new Samburu Street View imagery, Daballen said that approximately 100,000 elephants were killed in Africa between 2010 and 2012 as part of the illegal ivory trade.

But Save the Elephants is doing everything it can to restore elephant populations to healthy numbers. The organization has tracked elephants (as well as other animals) in Samburu National Reserve and elsewhere in Africa since 1998, using GPS collars to keep tabs on these animals as they roam around their native habitats.

If researchers notice that a collared animal has stopped moving, they send out a team to investigate. By tracking Samburu elephants specifically, researchers can help ensure that herds don't wander outside the wildlife preserve, where they can fall victim to hunters and poachers.

"Samburu is an elephant paradise. Thanks to the culture of the Samburu people, the elephants here are unusually tame and trusting, and that [has] allowed us to study them more deeply than almost anywhere else in Africa," Iain Douglas-Hamilton, founder of Save the Elephants, said in a statement.

The Samburu people of northern Kenya have many legends and totems pertaining to the elephant, an animal that they treat with the utmost respect, according to a short, Google-produced documentary that accompanied the release of the new elephant imagery on Google Street View. Users can get a glimpse into the lives of the Samburu people, the elephants they adore and many other animal species by checking out the Samburu National Reserve's Google Street View page.

In the past, Google Street View has brought Internet users closer to other wonders of the natural world. In June, the company unveiled imagery from El Capitan, the 3,000-foot-tall (900 meters) granite rock face in Yosemite National Park in California. Those with a fear of heights can now "climb" the famous rock formation without getting off the couch.

Like the new Samburu elephant initiative, other Google Street View projects have tried to raise awareness about places and populations under threat. For example, Google Street View lets Internet users dive into the world of coral reefs, which are some of the most endangered ecosystems on the planet. And in 2014, Google released its imagery of the frozen terrain outside of Churchill, a town in the Canadian Arctic and the so-called polar bear capital of the world. That project was a collaboration between Google and the conservation nonprofit Polar Bears International.