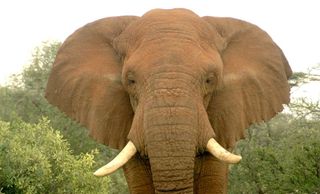 The male elephant Changila, shortly before poachers killed him near the Samburu National Reserve in Kenya.
(Image: © David Daballen)

The insatiable demand for ivory is causing a dramatic decline in the number of African elephants. Poachers are hunting the animal faster than it can reproduce, with deaths affecting more than half of elephant families in the Samburu National Reserve in Kenya, a new study finds.

African Elephants are an intelligent species; individuals cooperate with one another and console one another in times of distress, but people unfortunately like their ivory tusks, said the study's lead researcher, George Wittemyer, an assistant professor of fish, wildlife and conservation biology at Colorado State University.

Wittemyer has studied African elephants in Kenya for the past 17 years, monitoring their complex social lives. In 2009, a drought led to the deaths of about 12 percent of elephants in Kenya. The animals' numbers dropped further when a wave of poaching, which has been ongoing since that year, upset the population. [Elephant Images: The Biggest Beasts on Land]

"Sadly, in 2009, we had a terrible drought, and we started seeing a lot of illegal killing of elephants as well as natural deaths," Wittemyer told Live Science. "We've been struggling to respond. We've been trying to find solutions to dampen the illegal killing."

His team used data on natural deaths versus poaching deaths in the Samburu National Reserve in Kenya, and then applied these numbers to a continent-wide database called MIKE, or Monitoring the Illegal Killing of Elephants. Started in 2002, MIKE is maintained by communities across Africa that report when, where and how elephants die.

The researchers created two computer models: one that looked at 12 MIKE sites with the best carcass data, and a second that examined all 306 sites, even those with less information about elephant deaths. The researchers did not include areas in West Africa, which is home to about 2 percent of the African elephant population, because data there are sparse, Wittemyer said.

In the past 10 years, elephant numbers at the 12 sites have decreased by 7 percent, which takes into account that elephant numbers were mostly increasing until 2009. Elephants in central Africa decreased by more than 60 percent in the past 10 years, according to an analysis of three locations in the 12-site model. Poaching is so widespread that 75 percent of elephant populations across the continent have been declining since 2009, with only 25 percent showing stable or increasing numbers, Wittemyer said.

"Alarming increases in illegal killing for ivory are driving African elephants rapidly into extinction," said Peter Leimgruber, a conservation biologist at the Smithsonian Conservation Biology Institute, who was not involved in the study.

Poaching rates for ivory are unsustainable and exceed the natural growth rate of wild elephants, Leimgruber said. "This means that elephant populations currently decline by nearly 60 to 70 percent every 10 years, making it likely for the species to go extinct in the near future if poaching and the illegal ivory trade are not stopped," he said.

Much of the ivory demand comes from China and Southeast Asia. Many people see ivory as a status symbol and an artistic investment, especially for religious renditions, whereas others turn to ivory for mass-consumption products, such as bracelets and chopsticks, Wittemyer said.

A similar ivory boom in the late 1970s and 1980s tapered out when 115 countries opted to ban the international trade of ivory in 1989. Today, researchers hope that conservation organizations, as well as high-profile advocates such as Chinese basketball player Yao Ming, will help to stem the ivory demand.

Poachers killed an average of 33,630 elephants every year from 2010 to 2012, resulting in more than 100,000 deaths across the continent, the study found. Illegal killings across Africa decreased somewhat in 2010, but they were still higher than pre-2009 levels, the researchers reported. As more elephants are poached, the number of governmental seizures of illegal ivory increase, and the black market price of ivory goes up.

"The spike in the upward trends does appear to have leveled off, but at unsustainably high levels," John E. Scanlon, secretary general of the Convention on International Trade in Endangered Species of Wild Fauna and Flora, who was not involved in the study, told Live Science. "We know what needs to be done, and we must enhance our efforts in the front lines to address supply and demand across source, transit and destination countries."

The study was published today (Aug. 18) in the Proceedings of the National Academy of Sciences.

Editor's Note: This article has been updated to correct the number of elephants that have decreased.