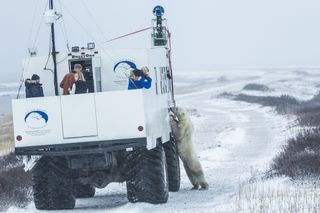 Google Street View has taken viewers to the Amazon, the Galapagos, and now, the Canadian Arctic — the home of polar bears. Starting today, on International Polar Bear Day (Feb. 27), people around the world will be able to see the bears in their natural habitat.

The Google Maps team brought their cameras to Churchill and the surrounding tundra in October 2013, capturing 360-degree panoramas of polar bears out on the snow. The goal is to capture the remote and starkly beautiful environment before it disappears, along with its furry inhabitants.

Putting bears on the map

Google has worked with other nonprofits in the past to bring Street View to some of the world's most remote and vibrant places, including the Amazon, coral reefs and Alaska's Denali National Park. Last year, PBI invited the Street View team to Churchill, Canada, for 10 days to photograph the bears.

The trekker captured images of bears sparring with each other, bears resting on the snow and sea ice in Hudson Bay, and even a few adorable cubs at play. [5 Weird Facts About Polar Bears]

Although they mostly keep to themselves, "the bears tend to be curious — there are some times when they come up to the truck," Wright told Live Science. One bear came up to the vehicle and stood up on its hind legs, pawing at the equipment. "We call it 'buggy love,'" Wright said.

Karin Tuxen-Bettman, Google's project leader in the Arctic, said the experience of being out there was amazing. "When you're outside looking at a polar bear, for me, personally, I felt so much excitement, but I also felt a little scared," Tuxen-Bettman told Live Science. "They're huge, but also very fragile. I kind of wanted to hug them."

For all their cuteness, polar bears face serious threats. The bears rely on sea ice to hunt, but the amount of sea ice is shrinking due to climate change. The Street View imagery creates a baseline record of current conditions, which can be used to track and communicate the effects of climate change.

PBI plans to use the Google images for educational outreach, to teach kids about the bears and to give them a chance to virtually explore the animals in their natural environment. For example, the nonprofit is developing a map scavenger hunt using the Street View maps.

PBI is also interested in using Street View's images for scientific research. Google trained PBI to use the trekker camera, and the nonprofit took a second round of images after the Hudson Bay froze over. They hope to use the cameras again to record changes in the bears' habitat over time.

The leaders of the polar bear mapping project hope that making the Google images available to anyone with an Internet connection will give the public a chance to see these charismatic creatures in the wild, and communicate the environmental threats the bears face.