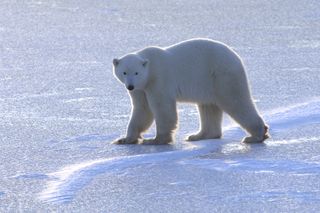 A young polar bear on the shores of Hudson Bay in Manitoba, Canada in November waiting for the sea ice to re-form.
(Image: © Copyright Andrew Derocher, Univeristy of Alberta.)

Today is International Polar Bear Day, which celebrates everyone's favorite furry beasts of the Arctic. In honor of the occasion, Live Science brings you some wacky facts about the furry beasts.

1. Males can weigh as much as a dozen men

2. They can go days without eating

If a polar bear doesn't eat for seven to 10 days, it can slow its metabolism until it finds its next meal. They survive off of fat reserves from their diet, which consists mostly of ringed and bearded seals. (But climate change is making food more scarce and driving some bears to cannibalism.)

The bears don't hibernate, but mother bears live in dens while they raise their cubs. While mama bears are in their dens (generally between January and March), they don't eat, drink or defecate.

Although polar bears appear white, their fur is actually transparent. It only appears white, because it reflects visible light. Under their fur, polar bear skin is actually black.

To humans and other animals that can see only in visible light, the bears appear to blend in with their snowy surroundings. But reindeer, which polar bears sometimes prey on, can see in ultraviolet light, which makes polar bears stand out from their snowy environment.

4. They have a razor-sharp sense of smell

Polar bears have a keen sense of smell, which they use to find prey. A polar bear can sniff out a seal on the ice 20 miles (32 kilometers) away, and can smell a seal's breathing hole in the ice more than half a mile away, according to the National Zoo.

5. Two-thirds of polar bears could disappear by 2050

Polar bears rely on sea ice to hunt, and studies predict that global warming could melt enough sea ice to lead to the disappearance of two-thirds of polar bears by 2050. The decline in sea ice has forced the bears to swim longer distances, consuming energy they cannot afford to use.

The United States listed polar bears as a threatened species under the Endangered Species Act in May 2008, and Canada and Russia have listed them as a species of special concern. Unless climate change slows, eventually there may not be any bears around to celebrate Polar Bear Day.