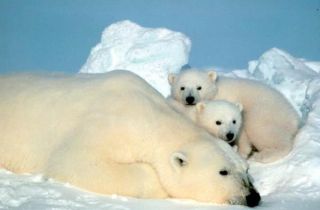 A polar bear mother and cubs in the Arctic.
(Image: © USFWS)

Summer and fall are lean times for polar bears in the Arctic. In the colder months, they prey on seals, which sprawl on the sea ice that fringes the bears' terrain. But in the summer, much of this icy real estate melts away, and the seals take to the open seas or move north toward ice floes beyond the polar bears' reach. Left without their usual prey, the bears occasionally resort to a disturbing behavior: cannibalism.

A new article in the journal Arctic suggests that polar bear cannibalism — typically the predation of small bears or cubs by much larger adult males — is either much more commonplace than previously thought, or has lately become more common. In the paper, leading polar bear biologist Ian Stirling and nature photographer Jenny Ross detail three recent instances of the behavior among polar bears in Norway's Svalbard Archipelago, each of which was photographed from the decks of ecotourism and research boats anchored a few hundred yards away.

Ross' vivid photographs show young cubs drooping from the jaws of huge males, their bright blood dashed against the pristine snow. Stirling, a scientist emeritus with the Canadian Wildlife Service and adjunct professor at the University of Alberta, relied on his extensive knowledge of polar bear physiology and behavior to glean information from the photos.

"[T]he data we present suggest that in late summer when there is not much ice left and the seals are present but mostly in the water and inaccessible, a smaller bear represents a potential food source," Stirling told Life's Little Mysteries, a sister site to LiveScience. "What I don't know is whether this has been going on for a long time and has only come to light as there are now lots of [ecotourism] ships going into the loose pack at the end of summer, or if it is something new."

The scientists are asking: are polar bears more often resorting to cannibalism because of increased hunger and desperation, or are we simply more frequently observing a behavior that has always existed? They say it's an important question to answer, because it will reveal whether or not the Svalbard polar bear population has started to feel the heat from climate change. [Is Cannibalism Becoming More Popular?]

Past research by Stirling and others, including Eric Regehr, a polar bear biologist with the U.S. Fish and Wildlife Service, shows that, as global warming has caused Arctic sea ice to start melting earlier and earlier each summer (as well as causing more of it to melt), some polar bear populations have been adversely affected.

According to a 2009 article by Regehr, Stirling and co-authors, the minimum amount of sea ice present during the Arctic summer has fallen by 8 to 9.5 percent per decade since 1979. "As the sea ice declines, bears can spend less time on the sea ice hunting their preferred prey, seals," Regehr wrote in an email. "Lower food (i.e., seal) access has been shown to result in lower body condition (i.e., thinner bears)."

Regehr explained that in some parts of the Arctic, such as the western Hudson Bay and the southern Beaufort Sea, the diminishing sea ice has already caused polar bear populations to decline. In other areas, such as the northern Beaufort Sea, this has not yet started to happen. Commenting on Stirling's new study, Regehr said there are reasons to believe sea ice decline in Norway may be putting nutritional stress on the polar bears there, pushing them toward cannibalism, but there's also reason to think otherwise.

"In general, observations of cannibalism may be consistent with the idea that as bears become more nutritionally stressed due to sea ice loss — which there is evidence for in some parts of the Arctic — they will seek out alternative food sources," Regehr said. "However, the bears [in this study] were all in pretty good body condition. A fat bear wouldn't be very motivated to risk attacking another polar bear just for food. So, we should certainly be cautious in interpreting these observations and remain open to other explanations."

Stirling agreed. "We do not have the information to separate those two possibilities."