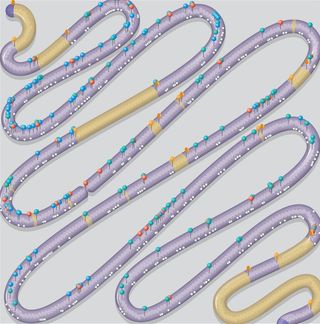 The chromosome is represented snake-like, with the positions of "designer changes" indicated by pins and white diamonds, and the deleted segments indicated in yellow, using the native chromosome sequence as a reference.
(Image: © Illustration by Lucy Reading-Ikkanda)

A chunk of the genetic blueprint for yeast has been created and pieced together from scratch, paving the way for "designer" organisms that could produce new medicines, food products and biofuels, the creators say.

Researchers took tiny snippets of man-made DNA and joined them together to create a synthetic version of a chromosome, the structure that contains DNA inside cells, from brewer's yeast. The ability to create such chromosomes is a major step for the field of synthetic biology, which aims to engineer microbes to produce useful products. The work also brings scientists closer to creating synthetic plants and animals.

"For me, one of most exciting aspects is the fact that we've so extensively edited the sequence of natural chromosome and then synthesized the entire thing from scratch," said study leader Jef Boeke, a synthetic biologist at NYU Langone Medical Center, who was previously at Johns Hopkins University. [Infographic: How Synthetic Yeast Chromosome Was Created]

Boeke was leader of the study detailed today (March 27) in the journal Science.

Humans first domesticated yeast for wine and other alcohol during the days of the Fertile Crescent (roughly 4,000 years ago), and have been using it ever since to make bread, wine and beer, Boeke told Live Science. Today, he said, the fungus is also used to makevaccines, medicines and biofuels, and the ability to create custom-made yeast would provide useful too for the biotech industry.

To create the artificial chromosome, Boeke and his team used computer software to design a modified version of yeast chromosome III, which they called synIII, and incorporated it into brewer's yeast (Saccharomyces cerevisiae). They chose this chromosome because it is one of the smallest of yeast's 16 chromosomes and controls how the cells mate and experience genetic changes.

It took the researchers seven years to stitch together the synthetic chromosome from pieces of DNA. The language of DNA consists of four "letters" — A, T, G and C — which form bonds called base pairs. The synIII chromosome contains 272,871 base pairs, slightly fewer than the 316,617 base pairs in chromosomes of native yeast, or natural yeast on which the simulated one is based. Undergraduate students at Johns Hopkins University did much of the work fusing together short pieces of DNA into longer segments, as part of a class project, and some of these former students were co-authors on the study. [Unraveling the Human Genome: 6 Molecular Milestones]

Boeke's team made more than 500 tweaks to the native genome, removing repeated sections and so-called "junk DNA" (not known to encode proteins, the molecules that perform vital tasks inside cells) including so-called jumping genes, which  randomly move around in the chromosome. The researchers also added tags to the DNA to label it as native or synthetic.

The completed chromosome was "remarkably normal," Boeke said, adding that the yeast with the synthetic DNA "behave almost identically to wild yeast cells."

Using a technique known as "scrambling," the scientists can shuffle the yeast genes like a deck of cards. The researchers could make millions and millions of different decks of genetic cards, which could give yeast totally new properties.

For example, researchers could make synthetic strains of yeast to produce rare medicines such as the malarial drug artemisinin, or vaccines like the hepatitis B vaccine. Synthetic yeast could also churn out more efficient biofuels, such as alcohol, butanol or biodiesel, which could enable humanity to transition off of a petroleum economy, Boeke said.

In addition to practical applications, synthetic yeast could be used to study how different genes function and interact, to understand how networks of genes influence behavior, the researchers added.

In recent years, scientists have created synthetic chromosomes from bacteria and viruses, but this is the first time anyone has built a chromosome from a eukaryote, an organism whose cells have nuclei.

Craig Venter and his team at the J. Craig Venter Institute, who created the first synthetic bacterium in 2010, praised the new achievement.

"This work is another remarkable example of how synthetic biology can be used to rewrite chromosome sequences at a sizable scale," Venter and his colleagues (who were not involved in the research) said in a statement. The research will lead to a better understanding of the rules of genome structure and behavior in yeast — "one of the most important model systems for understanding biological processes," they added.

Despite its utility, the work poses questions about the ethics of creating man-made genomes, especially in more complex organisms such as animals.

"There will always be challenges to new ideas and new ways of doing things, and concerns — some very legitimate — about safety matters," Boeke said. But humans have been engineering plants and animals for a long time, spanning from selective breeding to transgenic species, he added.

Right now, the cost of synthesizing chromosomes is prohibitively high, but that could change if the technology improves, Boeke said. He predicts that designer mini-chromosomes will be developed first, building on gene therapy, which seeks to treat diseases by replacing defective genes with functional ones.

Synthesizing plant and animal genomes is a long way off, Boeke said, but "the day will come."