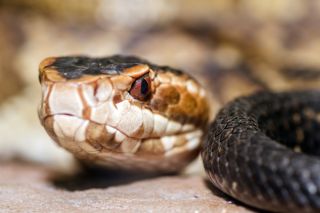 Cottonmouth snakes, like all pit vipers, have heat-sensing pits on their faces, between their eyes and nostrils.
(Image: © Rob Hainer | Shutterstock)

The water moccasin, North America's only venomous water snake, has a distinctive blocky, triangular head; a thick body; and a dangerous bite. Water moccasins rarely bite humans, however, and only attack when threatened. They are semiaquatic, so they're happy both swimming in water and basking on land in their native range in the southeastern United States.

Both "water moccasin" and "cottonmouth" are common names for Agkistrodon piscivorus, according to Sara Viernum, a herpetologist based in Madison, Wisconsin. "The name 'cottonmouth' comes from the white coloration of the inside of the snake's mouth," she said. Other local names include black moccasin, gaper, mangrove rattler, snap jaw, stub-tail snake, swamp lion, trap jaw, water mamba and water pilot.

Water moccasins are pit vipers, like copperheads and rattlesnakes. "Like all pit vipers, [they] have heat-sensing facial pits between their eyes and nostrils," Viernum said. These pits are able to detect minute differences in temperatures so that the snake can accurately strike the source of heat, which is often potential prey.

Water moccasins are relatively large, often ranging from 2 to 4 feet (61 to 122 centimeters) long, according to the Savannah River Ecology Laboratory. They have large jowls, due to their venom glands, and "cat-eye" pupils. Water moccasins have dark stripes by each nostril and pale snouts, which can be helpful in identifying features. Water moccasins' large, triangular heads are distinct from their thinner necks, unlike many other snakes that have no distinctive neck, according to the Department of Wildlife Ecology and Conservation at the University of Florida.

Their thick, muscular bodies are stout for their length and are covered in keeled, or ridged, scales. Their coloration varies from dark brown or black to olive, banded brown or yellow. Their bellies are paler than their backs.

Young water moccasins look different than adults. "Juveniles and young adults have bands across their bodies and are lighter brown," Viernum said. Their patterns, which can be striking, fade or are lost as they age.

Viernum described another interesting characteristic of juvenile cottonmouths. "The juveniles have bright-yellow tail tips that they use as a caudal lure to attract prey. They undulate the tail tip slowly back and forth to lure prey, such as frogs, within striking distance."

Water moccasins are often confused with nonvenomous snakes, leading to the death of many harmless snakes. According to the Virginia Herpetological Society, one such species is the northern water snake (Nerodia sipedon). It looks similar, but the crossbands on the back of the snake do not widen at the ends. Another snake often mistaken for the cottonmouth is the nonvenomous brown water snake (Nerodia taxispilota), which has most of its body below the water when in motion and only the head showing when it's motionless, unlike the cottonmouth, whose entire body is on the surface of the water.

Viernum offered advice on how to tell the types of snakes apart: "Nonvenomous water snakes have round pupils, whereas cottonmouths have vertical, catlike pupils. Cottonmouths also have a triangular head, and nonvenomous snakes have a more slender, elliptical head shape," she said. But these snakes can be tricky, and the head shape bears a second look because "most nonvenomous snakes can flatten out their head, which causes them to take on a more triangular appearance.

According to the Smithsonian National Zoological Park, water moccasins live in the southeastern United States, from southern Virginia to Florida to eastern Texas. Water moccasins may be found swimming in swamps, marshes, drainage ditches, and at the edges of ponds, lakes and streams. On land, they're found near water and fields. They like to sun themselves on branches, stones and logs near the water's edge. Basking keeps up their body temperature, which chills quickly in water, according to the Smithsonian National Zoological Park.

Water moccasins swim close to the top of the water, with their heads out. According to the Savannah River Ecology Laboratory, they can be seen year-round, both during the day and at night, but they primarily hunt after dark, especially in the summer. Water moccasins eat fish; small mammals; birds; amphibians; reptiles such as lizards, baby alligators and turtles; and other snakes, including smaller water moccasins.

Water moccasins mate in spring. According to the University of Michigan's Museum of Zoology Animal Diversity Web, during the mating process, males slither around, waving their tails in an attempt to lure the females away from other suitors. The males also fight each other. Water moccasins are ovoviviparous, which means that eggs incubate inside the mother's body. Females give birth to live young every two to three years, in litters of about 10 to 20 babies. The gestation period lasts three to four months. Babies are born brightly colored and take off on their own as soon as they're born. Parents do not care for them.

There are three subspecies of water moccasin: western, Florida and eastern cottonmouths. According to the Integrated Taxonomic Information System (ITIS), the taxonomy of cottonmouths is:

Water moccasins have a reputation for being aggressive, but in reality, they rarely bite humans. They will, however, stand their ground, unlike many nonvenomous water snakes that flee from threats, according to the Virginia Herpetological Society. Viernum described water moccasin's most distinctive defense behavior:

"When a cottonmouth feels threatened, it will coil its body and open its mouth wide to expose the white coloration of the inside of its mouth. The white color can be a striking visible display, especially in older adults, whose body colors are dark brown to almost black … Exposing the white of the mouth serves as a warning signal to potential predators."

Water moccasins' venom is potent. "Cottonmouth venom is composed mainly of hemotoxins that break down blood cells, preventing the blood from clotting or coagulating," Viernum said.

The results can be serious or even deadly, though Viernum and other experts emphasize that fatalities are very rare. Viernum further described the effects of the bite, saying that the hemotoxins lead to "hemorrhaging throughout the circulatory system wherever the venom has spread," she said.

"Envenomation from a cottonmouth can lead to temporary and/or permanent tissue and muscle damage; loss of an extremity, depending on the location of the bite; internal bleeding; and extreme pain around the injection area," Viernum added. Anyone suffering from a water-moccasin bite should seek medical attention immediately. Antivenin is available.