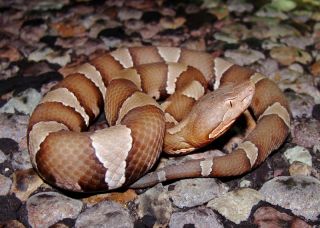 Snakes play important roles in ecosystems, but they also terrify some people. That fear has led to many myths about snake behavior.

To get to the bottom of some of the assumptions about snakes in the United States and separate fact from fiction, Live Science talked to several snake experts. Here are some commonly held beliefs about snakes and whether they're true or false. [The World's 6 Deadliest Snakes]

1. Copperheads are usually found near water.

Sort of true. Copperheads may be found near water, but they're usually there by accident. "Copperheads like forest habitats, which often contain bodies of water," said David Steen, a snake researcher at Auburn University who blogs about snakes at LivingAlongsideWildlife.com. For instance, their range includes forests throughout the eastern United States.

"It might be hard to find a place anywhere within their geographic range that wasn't within a mile or so of some kind of water source," said Jeff Beane, the reptile collections manager at the North Carolina Museum of Natural Sciences.

2. Copperheads and other snakes are more venomous as juveniles.

"Basically, don't mess with venomous snakes, no matter what age they are," Steen said.

False. "Normally, they don't have any reason to climb trees," Beane said. When in pursuit of prey, they may climb onto low-hanging branches that are only a few feet off the ground, but that is not common behavior. "Their bodies are not very well designed for climbing," Beane added.

4. Snakes are most active in the spring and autumn.

It depends. "Some snake species are highly seasonal in their activity; others are active all during the warm season," Beane said.

But the copperheads that are common in the eastern and southern United States do show seasonal patterns in activity.

"In the spring, they're coming out of hibernation and foraging and seeking warmth, making them more visible," Steen said. "In the autumn, they are looking for mates and traveling to their hibernation refuges. In the summer, when it's really hot, they're more likely to be active at night. People don't see them as much, so [they] think they're not as active."

5. Snakes are more afraid of you than you are of them.

True. Snakes may sense humans as a threat, but they "don't have the same concept of fear that humans do — so in that sense, they are not particularly scared of humans," Beane noted. However, "they definitely do not want anything to do with humans," he added. [7 Shocking Snake Stories]

"We're a lot bigger than they are," Steen said. "They view us as a potentially dangerous predator. They will defend themselves if they feel threatened, but if we leave them alone, they'll leave us alone." That means that, if you encounter a snake in the woods, you should observe it from a distance. It’s okay to appreciate wildlife in its natural surroundings, but stay at least six feet away from it – the further away you are from the snake, the more the snake will appreciate it. And if the snake seems agitated, walk away.

Mostly false. For one thing, "snakes lack external ear openings and are deaf to airborne sounds, so they won't hear or be afraid of pure noise," Beane said. "But they can feel vibrations through the substrate extremely well, so if you are treading very heavily, snakes might feel the vibrations through the ground."

Plus, snakes are a diverse group, so it's difficult to generalize.

"Some snakes, like racers and coachwhips, will crawl away if they feel threatened," Steen said. "But others will rely on camouflage — like rattlesnakes and copperheads. So if you're making a lot of noise, they're just going to hunker down and hope that you don't see them."

7. If you get bitten, use a tourniquet to stop the venom from getting to your heart.

False, most of the time. "Tourniquets are not recommended for any type of pit-viper bite," said Dr. Sean Bush, an expert on the medical treatment of snake bites and a professor of emergency medicine at East Carolina University. Pit vipers include rattlesnakes, copperhead and cottonmouths (also known as water moccasins).

"Pit-viper venom digests tissue, and the tourniquet would add insult to injury and intensify local tissue injury," Bush said. It has not been shown to improve outcomes.

"However, in the event of a coral-snake bite, a looser tourniquet, like an Ace wrap, may be useful, because it would slow the flow of the venom into circulation and buy you some time," Bush added. "Coral snakes have a neurotoxin in their venom that can stop your breathing — it's paralytic, rather than causing tissue damage. Luckily, coral snake bites are incredibly rare."

8. If a snake bites you, suck the venom out of the wound.

False. "Suction is ineffective," Bush said. "The amount of venom it removes is tiny — 1/10,000 of the venom that gets introduced. It can't do any good, and it can do additional harm" by causing additional injury to the area around the bite," he added.

9. If you find a juvenile snake, the mother is not far behind.

Mostly false. Even so, that's no reason to rest easy. "All pit vipers in the United States —including rattlesnakes, copperheads and cottonmouths — give birth to live young," Steen said. "There's some evidence that rattlesnake mothers will spend time near juveniles while they are still in the den where the mother gave birth. However, there's no evidence that the mothers and juveniles spend time together after leaving the den. For egg-laying species, like coral snakes, the mothers are long gone by the time the juveniles hatch."

So, why should you still be wary?

"If you find a snake, you're probably in good snake habitat, so there are probably other snakes around," Steen said.

False. "I've heard this a lot, but I haven't experienced it myself," Steen said. "But I do think that eastern diamondback rattlesnakes smell like Doritos."

Beane noted that copperheads do produce a defensive "musk" when agitated, but he thinks it smells like, well, snake musk.

11. Snakes won't slither away when confronted by humans, but they will attack.

True and false. "Many venomous species, including copperheads, rely on their camouflage to avoid conflict — so they don't run away," Steen said. Therefore, it's true that many snakes won't flee.

However, "no snake will attack a human," Beane said. "Most will retreat, given any reasonable chance. But many will defend themselves by attempting to bite if a human suddenly touches them, pokes at them or otherwise gets in their face or invades their personal space."

That's what happens when someone accidentally steps on a snake and gets bitten.

12. Cottonmouths will chase people down.

False. "This is one of the things I hear most often," Steen said. "When a cottonmouth is afraid, it will head toward the water. If you are between it and the water, it will appear to be coming toward you."

But endurance is on your side. "Snakes aren't fast enough to pursue anyone for any distance; they can crawl about as fast as a person can walk, and they tire quickly," Beane said. "A snake that is harassed a great deal and forced to defend itself might advance upon a person for a short distance, striking at them repeatedly." But if the person were to turn and run away, he would look back and see that the snake was not chasing him at all, Beane said.

13. If you kill a snake and leave it, the snake's mate will lie with it and protect it — so stay away.

False. "Snakes don't form those kinds of social bonds, so there is no reason for a snake to do that," Steen said. "I think it stems from the fact that if you see one snake, you're in good snake habitat, so you're more likely to see other snakes."

But Beane offered another possible explanation.

"During breeding season, male snakes have been known to attempt to mate with dead females," Beane said. "It is possible that a dead female snake might attract a male, but only because male snakes recognize receptive females by chemical cues and don't understand death."

14. All swimming snakes are venomous.

False. Most snakes that you'll see in the water in the United States are not venomous. "The cottonmouth is the only venomous snake in the U.S. that spends a lot of time in the water," Steen said.

15. All venomous snakes have triangular-shaped heads.

False. Pit vipers have triangular-shaped heads, but venomous coral snakes do not, Steen said. "And lots of nonvenomous snakes — such as water snakes and hognose snakes — will go into a defensive pose to make their heads look triangular" so that they look like venomous snakes, Steen added.